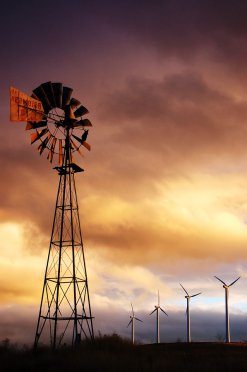 The strong wind resources in western North Dakota have remained largely untapped, but North Dakota Commissioners are seeking to improve siting protocol so that the state can benefit from yet another natural resource – wind energy.

Wind on the Wires staff heard about this and many other issues affecting North Dakota’s energy industry while in Bismarck for the Mid-American Regulatory Conference earlier this month. The wind industry was well-represented at the conference, underscoring the near- and long-term opportunities for wind development in North Dakota.

The wide-open plains of western North Dakota are currently dotted with oil rigs and transmission lines. However, the recent downturn in oil production has left some local communities looking toward wind energy as a way to diversify their economy, provide new sources of revenue, and create new job opportunities in the region. In fact, the North Dakota Public Service Commission has given approval to every wind farm that has been proposed in the state – and they show no sign of changing this trend.

Western North Dakota has seen 400 wind turbines developed in the last decade, a relatively low number when compared to neighboring states. However, North Dakota has some of the best wind capacity in the country. Developers, commissioners, and landowners have begun to come together to set the stage for the beginning of the North Dakota wind boom.

Although several wind farm proposals have faced outspoken public scrutiny, the North Dakota Commission is taking a balanced and deliberate approach to permitting and siting wind farms. By matching the needs of private wind companies with those of interested landowners, the Commission has begun to take steps that, if done carefully, will allow the state to benefit greatly from renewable energy development.

Wind project development in North Dakota is expected to grow rapidly in the near- to mid-term. Currently, North Dakota has 2,143 MW of installed wind power capacity. In the last six months alone, over 1,500 MW of wind capacity has been placed in the MISO interconnection queue. Wind on the Wires members like Next Era, Apex Clean Energy, and Enel Green Power North America have publicly announced wind farms in North Dakota.

The transmission infrastructure in North Dakota makes the state attractive for wind farm development in the near term, but more transmission will be needed to capture the full benefits from renewable energy. “The transmission system that exists in North Dakota has been reinforced and enhanced in the recent years to facilitate more wind,” PSC Chairwoman Julie Fedorchak has stated. Wind project developers understand that access to transmission lines is almost as important as the region’s wind resource itself. The state’s transmission lines that once carried coal-fired energy will see a large influx of wind-powered energy – but would benefit from building on its transmission infrastructure to accommodate more wind power.

Thinking about additional transmission between SPP and MISO, particularly in the northern region, the RTOs have agreed to conduct a Coordinated Study for 2016-2017.  The exact study scope will be posted on June 30.  SPP has suggested the study focus on the seam from North Dakota/South Dakota south to Nebraska/Iowa and that it focus on reliability issues. However, it is not yet known whether the study will include an analysis of the deliverability of wind resources. This would be advantageous for wind developers since there is approximately 19.2 GW of wind in the DPP and SPA that is sited in Minnesota, North Dakota, South Dakota and Iowa as of June 27.

The study cannot start later than November 27, 2016.  Wind on the Wires will be pushing for an earlier start date and for the study to be completed in less than the maximum duration, which is eighteen months.

Both Wind on the Wires and The Wind Coalition (TWC) would prefer a broader scope for the Coordinated Study that focuses on generation retirements/replacements and transmission for a low carbon future for the entire SPP-MISO seam, rather than just a portion of the seam. However, it’s not yet clear whether there is support for the broader study scope. WOW and TWC will be advocating for the broader study and at the very least inclusion of wind in the more narrow study scope.

North Dakota has long held the tradition of putting its land to work; coal, oil, and wind energy are all natural resources that benefit the state. To fully benefit from its wind resource, North Dakota must continue the evolving discussions at the Commission and begin upgrading its transmission infrastructure. Because of these vast natural resources, a supportive climate from the public and state agencies, North Dakota is well-positioned to advance its standing as a top energy producer in the Midwest.