The Minnesota Department of Revenue Property Tax Division compiled the amount of wind energy production tax revenue that is paid to counties earlier this month.  Since 2004, wind companies have paid $106,814,805 in such payments, which are funneled back to the rural Minnesota counties that host wind developments. 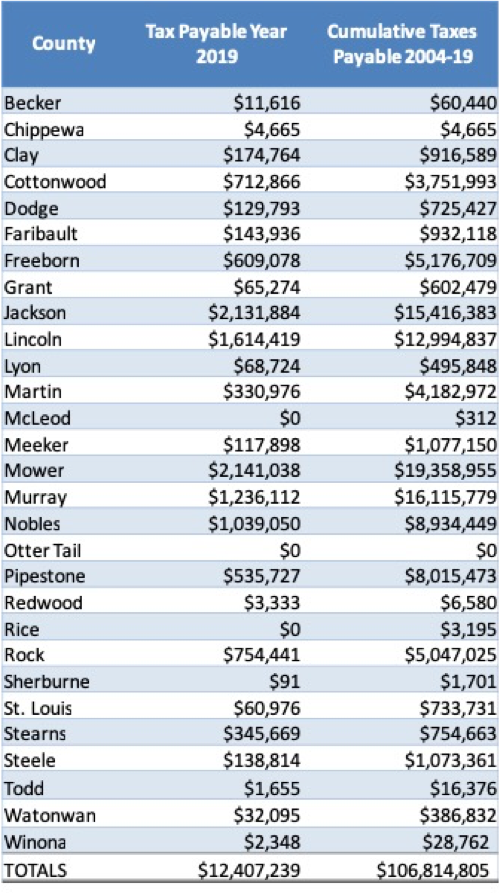 Nearly 30 percent of the counties in Minnesota receive wind energy production tax revenue.These funds go a long way toward road and bridge improvements, schools and emergency services, as well as holding down property taxes in small towns where attracting big businesses and other sources of new revenue are hard to come by.  Click here to learn more about how communities benefit from wind.

Nationally, wind farms pay more than $1 billion annually to rural communities according to the American Wind Energy Association’s (AWEA) 2018 Annual Market Report.  This massive financial investment reflects a combination of $761 million per year paid by wind farms in state and local taxes that may be used to help support schools systems, fix roads, invest in emergency services, and even hold down property taxes.  Another $289 million annually is paid in wind farm land lease payments, which provides a valuable cash-crop for farmers and ranchers.

In Minnesota, more than $12 million in wind energy production tax revenue is going to counties that host wind farms this year.  In addition, another $10 - $15 million was paid in land lease payments to landowners last year, according to AWEA. Rural communities around the country are benefiting from the development and growth of our renewable energy sector. Wind energy is a low-cost, clean, and reliable form of renewable energy that is just smart for Minnesota.