Illinois is a leader in wind power in the nation — and the future of solar and energy storage is growing. Renewable energy is poised to continue delivering the benefits of clean energy for years to come.

Illinois is currently 6th in the nation for installed wind capacity with over 2,300 MW of wind energy — enough to power 1,231,900 homes with clean, low-cost wind power. It also has a whopping 34 active manufacturing facilities that help make products for the wind industry. That’s good for the economy, because Illinois’ wind industry employs over 7,000 people with family-supporting careers. Wind has also created $9.9 billion in capital investments for the state, as well as over $40 million in annual state and local tax payments and over $10 million in annual land lease payments for rural landowners.

There are currently 370 Megawatts (MW) of wind power under construction and another 1,080 MW in advanced development. Not only is that good for the economy - but it’s good for the environment, too. Generating wind power creates no emissions and uses virtually no water. In 2018 alone, Illinois wind power helped to save 5.7 billion gallons of water and avoided 10.7 million metric tons of CO2 — the equivalent of taking 2.3 million cars off the road.

While Illinois only ranks 36th in the nation for installed solar energy with 108 MW, it is projected to add 1,636 MW of solar over the next five years. The cost of solar has dropped 88% since 2009 making it one of the lower-cost sources of electricity generation in the nation. Currently, solar supplies 0.08% of Illinois’ electricity, enough to power 16,727 homes.

There’s plenty of room for solar to grow in Illinois — but solar power is already delivering economic benefits to the state. Nearly 5,000 people are employed in Illinois’ solar industry. The state is currently home to 366 solar companies, including 71 manufacturers, 127 installers & developers, and 168 other companies related to the industry. Solar power has also invested $312.20 million in the state — and those benefits will only increase as more solar is developed.

Illinois is also seeing potential for the emerging energy storage industry, which is an integral piece of a clean energy grid. While the state only has 0.3 MW of storage online (as of 2017), the state’s largest electric utility, ComEd, sees a significant role for energy storage as the state works toward its renewable energy goals. ComEd currently has five storage pilots that are active or in the development phase, ranging from a 25-kilowatt community energy storage system to a 2-MW battery system planned for Zion, Illinois. Storage not only helps the utility harness more low-cost clean energy, but it can also cut costs by not needing to upgrade substations in the electric grid.

As America’s energy sector transitions to a clean energy economy, states across the nation are preparing for a future with huge growth in clean jobs. According to the 2019 Clean Jobs Midwest Report, Illinois is home to 123,247 clean energy jobs, the first in the Midwest. Nearly seventy-five percent of those jobs are in energy efficiency, followed by renewable energy generation, advanced transportation, advanced grid, and clean fuels. In total, clean energy accounts for over 1.84 percent of the state’s labor force, and they’re growing quickly. Over 4,700 clean energy jobs were added in 2018 alone.

During the 2019 legislative session that ended May 31, a number of energy bills were introduced. Summer negotiations will likely produce an energy omnibus bill for veto session at the end of 2019. Key topics for negotiation include increasing the Illinois RPS and allocating additional dollars for procuring renewables, creating an energy storage program, treatment of several existing fossil generators, and a number of other utility-specific issues. 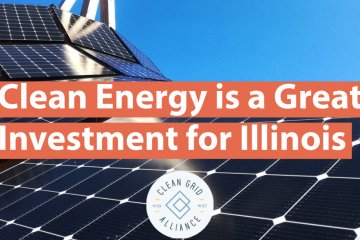 Clean Energy is a Great Investment for Illinois
As one of only six states in the country to top 5,000 megawatts   […]   Read More »
Clean Power Plan | Cost | Economic Development | Jobs | Solar