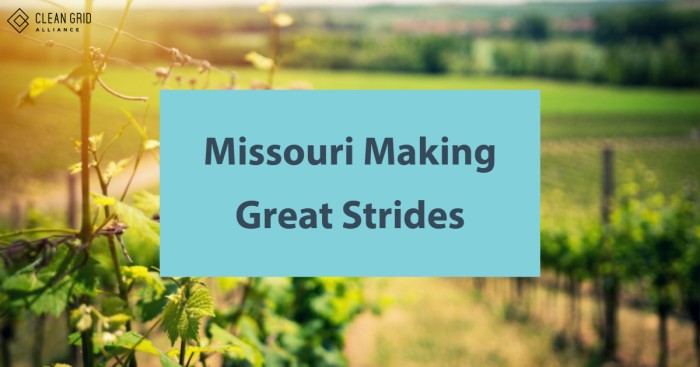 As renewable energy costs decrease, the potential for growth rises. Missouri’s clean energy sectors have been making great strides. Successes in the state’s wind, solar and storage sector allows for hope for the future.

Missouri’s wind energy sector is poised to see significant growth in the coming years. In 2018, 282,800 homes were powered by wind and the state currently has an installed capacity of 959 megawatts (MW) of wind power. Although it only ranks 23rd in the nation, there are 479 MW under construction and another 1,157 MW in advanced development to look forward to. Another benefit for Missouri is its 11 manufacturing facilities that make products for the wind industry, which employs over 1,000 people. Wind has also created $1.9 billion in capital investments for the state, as well as an impressive $4.5 million in annual local tax payments and about $5 million in annual land lease payments for rural landowners.

While this expansion is surely great for the state economy, it has done wonders for Missouri’s environment, as wind power generation creates no emissions and uses virtually no water. In 2018 alone, Missouri’s wind power helped to save 8.1 billion gallons of water and avoided 14 million metric tons of CO2 — the equivalent of taking 3.1 million cars off the road.

Missouri solar power has been taking off as well. Major companies have been getting involved in the state’s solar market, including IKEA, which built a 1 MW project in St. Louis. Ranking 29th in the nation for installed solar energy with 229.5 MW, Missouri is projected to add 317 MW over the next five years. The cost of solar has dropped 88% since 2009, making it one of the lower-cost sources of electricity generation in the nation. Currently, Missouri’s electricity is made up of 0.47% solar energy, enough to power 26,126 homes.

Missouri’s solar industry employs 3,115 citizens through its 154 solar companies, 19 manufacturers, 66 installers and developers and 69 other related companies. The solar industry has invested $606.68 million in the state, and this is likely to increase.

The energy storage industry in Missouri is also seeing continual growth. This year, utility Ameren Missouri announced plans to invest $68 million to build three grid-scale solar power plants with energy storage in rural areas of the state. This will mark the first ever instance of an energy company in the Midwest to power its customers’ homes with batteries. The plants will be built in Green City, Richwoods, and Uticah, with each plant having 10MW of solar PV capacity.

As America’s energy sector transitions to a clean energy economy, states across the nation are preparing for a future with huge growth in clean jobs. Missouri currently has 55,869 clean renewable energy jobs. Renewable energy is the third largest employer in Missouri with 5,251 workers, a 3.5 percent increase from the previous year. Employers are anticipating a 7.7 percent increase in clean energy jobs in the next year.

Renewable energy accounted for six percent of the state’s electricity in 2018, two-thirds of which were generated by wind. This is expected to expand as utilities make plans to add more wind to their portfolios. As the state welcomes more clean energy projects, ratepayers will continue to benefit from low-cost clean energy, new jobs will emerge in urban and rural communities, and businesses will continue to grow. Clean Grid Alliance is actively working to ensure good policies are in place in Missouri to ensure that the renewable energy industry will continue to grow.