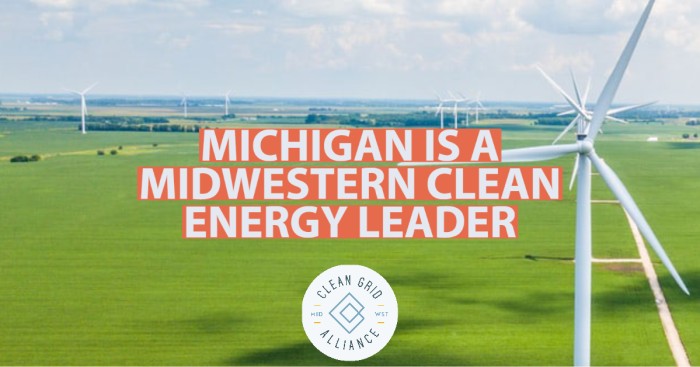 Renewable energy has undergone significant change in the last ten years. The U.S. now receives over 20 percent of its electricity from clean energy – a significant amount of which comes from the Midwest, now a central hub for wind and solar generation. As generation increases, Michigan has taken action to meet the demands of the upper Midwest. Developments in the state's wind and solar sectors have positioned Michigan as a leader in the transition from fossil fuels to clean energy.

Ranking 15th in the nation for operating wind, solar and storage capacity, Michigan is reaching new heights in terms of renewable energy in the state. As of June, 2022, over 1.5 million homes were powered by wind, solar and storage, and the state currently had an installed capacity of 3,706 megawatts (MW) of wind power. Wind, solar, and storage have also generated $7 billion in capital investments for the state, as well as an impressive $54.8 million in annual local tax payments and about $41.3 million in annual land lease payments for rural landowners.

Michigan's growing renewable energy sector has been a welcome change for the state's economy, as well as its environment. Wind and solar power generation creates no emissions and uses virtually no water. Michigan's wind, solar, and storage sectors helped save 5 billion gallons of water in 2021 and have avoided over 9 million metric tons of CO2 — the equivalent of taking 2 million cars off the road.

Michigan's solar sector is also projected to skyrocket. As of 2021, Michigan ranked 24th in the nation for installed solar energy with 937.7 MW, Michigan is projected to add an astounding 2,594 MW over the next five years. The cost of solar has dropped 90 percent since 2009, making it one of the lower-cost sources of electricity generation in the nation. Currently, Michigan's electricity is made up of 0.79 percent solar energy, enough to power 149,933 homes. Michigan's solar industry employs 3,941 citizens through its 178 solar companies, 60 manufacturers, 68 installers and developers and 50 other related companies. The solar industry has invested $1.2 billion in the state, and $497 million in 2021 alone.

As America's energy sector transitions to a clean energy economy, states across the nation are preparing for a future with huge growth in clean jobs. Michigan is a leader in clean energy jobs, ranking 2nd in the Midwest with 113,456 jobs. Renewable energy is the third largest employer in Michigan with 10,767 workers.

Renewable energy accounted for 11 percent of the state's electricity in 2021, most of which came from wind, which has been Michigan's largest source of clean energy generation since 2013.