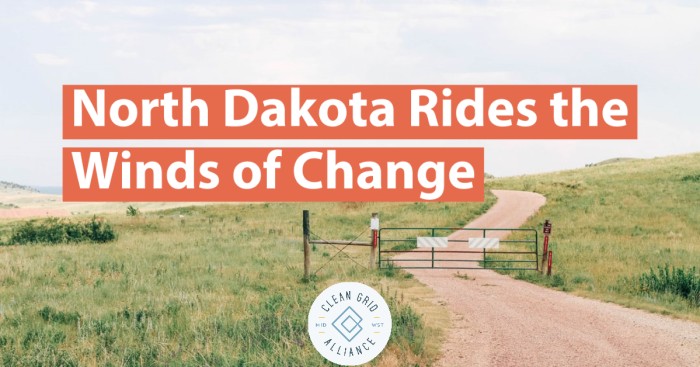 Renewable energy brings great change and opportunity to the electrical grid and the communities benefitting from it. The Midwest is being powered by wind and solar energy in the home, as well as in the economy and job market. As generation increases, North Dakota reaps the benefits in both rural and urban areas.

Ranking 9th in the country for installed capacity, North Dakota has embraced wind energy as an asset to its livelihood. Capacity has more than tripled since 2009, and now stands at 3,628 megawatts (MW), enough to power 500,000 homes. There are 449 MW under construction and another 200 MW in advanced development. Its four manufacturing facilities make products for the wind industry that are exported across the country. Capital investments have reached a record $6.9 billion, and state and local taxes contribute $11 million annually. Another $22 million in annual land lease payments flow to rural landowners.

North Dakota’s power sector has created opportunity for the state’s economy, as well as its environment. Wind power generation creates no emissions and uses virtually no water. North Dakota’s wind sector helped to save 1.4 billion gallons of water and avoided 2.5 million metric tons of CO2 — the equivalent of taking 530,000 cars off the road.

North Dakota’s solar sector is just getting started, and there’s plenty of potential for growth. Although it only ranks 51st in the nation for installed solar energy with 0.44 MW, North Dakota is projected to add nearly 78 MW over the next five years, ranking 4th in new project additions nationwide. Solar is one of the cheapest sources of electricity. Prices have dropped 88 percent since 2009. North Dakota’s solar industry employs 257 people through its 12 solar companies, four manufacturers, three installers and developers, and five other related companies. The solar industry has invested $1.73 million in the state, and this is likely to increase.

As America’s energy sector transitions to a clean energy economy, states are implementing new strategies so that everyone can access these resources. North Dakota was one of the first states to implement net metering. This gives residential properties and small businesses small renewable energy and combined heat and power systems up to 100 kilowatts, and the ability to sell any excess electricity to investor-owned utilities.

As a net exporter when it comes to energy, North Dakota abides by an “all of the above” policy. Wind is a growing portion of that energy. By 2030, property tax revenues from wind energy could reach more than $37 million every year. This revenue would allow communities to maintain and repair infrastructures, improve schools and invest in better emergency and public safety measures. More renewable energy also means fewer costs for consumers. Through 2050, wind could save customers nearly $4.5 billion on their electric bills. North Dakota’s future is being powered by renewable energy, and that’s just smart.