Iowa is a Field of Opportunity for Renewables 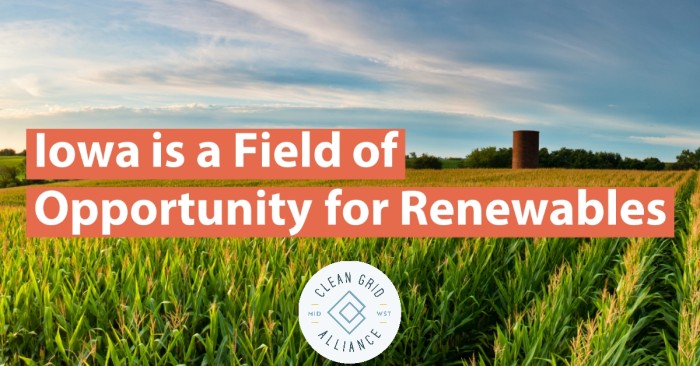 In times of change and innovation, the renewable energy industry is seeking to reduce the effects of carbon and other harmful greenhouse gases while providing affordable, reliable electricity for customers. In the heart of the Midwest, surrounded by fields of opportunity, Iowa is growing its clean energy economy. With the bulk of its electricity deriving from renewables, this has translated into $19 billion for the state’s economy.

Iowa gets about 42 percent of its in-state electricity production from wind power, ranking 1st in the country. In fact, more than 2,000,000 homes are powered by wind. With 10,664 megawatts (MW) online, the state ranks second in the nation for installed wind capacity. Another 1,212 MW are currently under construction. State and local taxes produce up to $61 million for the state coffers every year, and an additional $69 million in annual land lease payments are being paid to rural landowners.

Renewables offer much more than economic benefits. Wind power generation reduces emissions and uses virtually no water. Wind in the state saved 7.1 billion gallons of water and avoided 12.6 million metric tons of CO2 — the equivalent of taking 2.7 million cars off the road.

Iowa’s solar sector is small but growing. Even though it ranks 38th in the nation for installed solar energy with nearly 140 MW. That’s enough to power over 17,000 homes. This will increase as Iowa adds its projected 375 MW over the next five years. Solar prices have dropped 88 percent since 2009, making it one of the cheapest electricity sources. The solar industry has already invested over $282 million in Iowa, and the industry employs 1,029 people through its 70 solar companies, including 11 manufacturers, 34 installers and developers and 25 other related companies.

As more states open their borders to clean energy, ratepayers will continue to benefit from its low-cost and great jobs. New job opportunities will emerge offering good, family-supporting jobs to people in urban and rural areas. According to Clean Jobs Midwest, more than 32,000 Iowans were employed in a clean energy job prior to COVID-19. These jobs grew 20 times faster than the state’s overall employment in 2019. Renewable energy is the second largest clean energy employer in Iowa, with 5,796 workers. Currently, large cities like Des Moines and Cedar Rapids have the largest number of clean energy jobs, but 44 percent were located in rural areas of the state.  The state’s 11 manufacturing facilities provide direct wind jobs while making products for the wind industry. In addition, businesses will benefit from the economic ripple effect that comes from renewables.

As America’s energy sector transitions to a clean energy economy, states are implementing strategies to incorporate more renewables and setting carbon-reduction goals. In 1983, Iowa was one of the first states to adopt a renewable portfolio standard, but it only required major utilities to acquire 105 megawatts of renewable energy sources. Fortunately, the state embraced its natural resources and allowed renewable energy development to flourish and contributed significantly to the state’s economy.