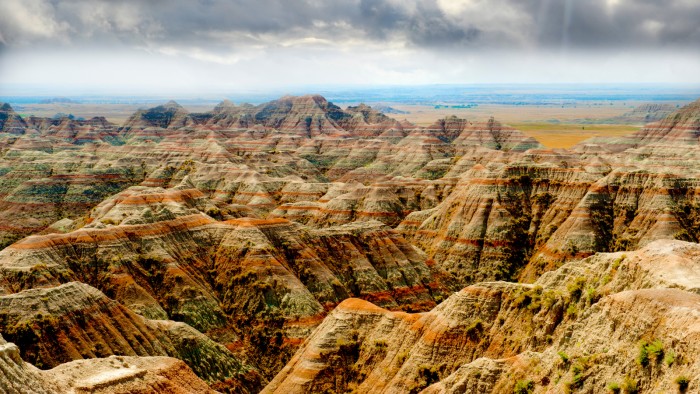 From the prairies to the Black Hills, South Dakota is growing its clean energy economy in a big way. Thanks to the efforts of the renewable energy industry, landowners and surrounding communities, South Dakota has already received over $5 billion in cumulative wind, solar, and storage project investment.

South Dakota gets over 53.4 percent of its in-state electricity production from wind, solar, and storage power plants, ranking third in the country and powering up to 862,000 homes. Up to $28.7 million in state and local taxes are paid by the wind, solar, storage industry every year, and another $20.6 million in annual land lease payments are being paid to rural landowners. Wind, solar, and storage has saved more than 3 billion gallons of water in South Dakota and has avoided more than 8,704,000 metric tons of carbon dioxide, the equivalent of taking 1,890,000 cars off the road.

With 3,219 megawatts (MW) online and 454 MW under construction, the state ranks 15th in the nation for installed wind capacity.  Wind is now the largest generator of electricity in South Dakota and accounted for over 52% of electricity generated in 2021. South Dakota now produces twice the amount of electricity that it uses and exports the excess to other states.

Although South Dakota's solar capacity is in its infancy, it is poised for growth. There are 252 MW of solar projected over the next five years. This is great news because solar prices have dropped 53 percent since 2012, making it one of the cheapest electricity sources available. The solar industry has already invested over $5 million in South Dakota through its 11 solar companies, including two manufacturers, five installers and developers and four other related companies. More importantly, the South Dakota solar industry grew by 6.5 percent in 2021 to employ a total of 645 South Dakotans.

America is transitioning to a clean energy economy as states implement strategies to incorporate more renewables and set carbon-reduction goals. As more states embrace clean energy, ratepayers will benefit from its low-cost, and citizens can benefit from the great jobs and economic development that it offers. New job opportunities will emerge offering good, family-supporting jobs to people in urban and rural areas. According to Clean Jobs Midwest, in 2021, South Dakota regained all of the clean energy jobs they lost during the COVID-19 pandemic, and even gained more. There was a 4 percent increase in jobs from 2020 and clean energy jobs grew almost 50% faster than the overall economy. Clean energy now employs more than 11,800 South Dakotans. Renewable energy is the second largest clean energy employer in South Dakota, with 2,743 workers. Clean energy jobs can be found at businesses of all sizes, though 59% of South Dakota's clean energy businesses are considered small businesses that employ fewer than 20 individuals.

In addition to clean energy businesses, local towns and communities also benefit from renewables. According to South Dakota Searchlight, Jerauld County received $110,000 from wind energy projects. This was used for road maintenance and development. A local school district also received over $150,000 in tax revenue from wind energy projects. Four other townships in the area split an additional $47,000.

Renewable energy also benefits landowners in South Dakota. South Dakota resident Nick Nemec has a wind turbine on his 5,000-acre farm and gets paid yearly for the electricity that it produces. The first year that the turbine was on his property, Nemec received a check for $14,000 and donated the entire amount to help build a new local swimming pool.

As the transition from fossil fuels to clean energy marches on, South Dakota will reap the benefits of a low-cost, reliable, and renewable source of electricity. Families are supported through the growing clean energy job market and farmers and ranchers can rely on a steady source of income. The growth of South Dakota's clean energy output also helps reduce carbon emissions and creates more economic opportunity. Renewable energy creates stability for Rural America – and that's just smart!