Wisconsin Wins with Wind and Solar 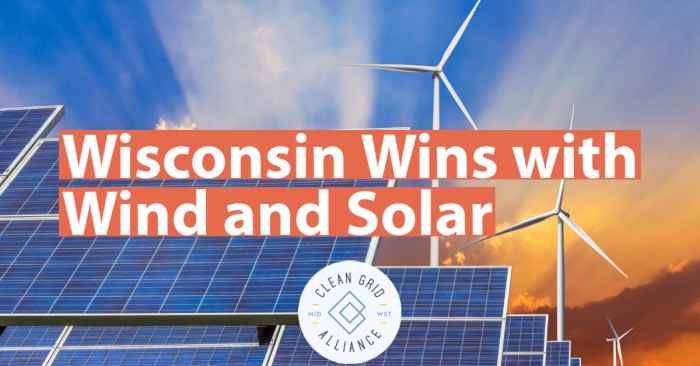 As technology innovations accelerate project development and prices decrease, Wisconsin’s clean energy economy is growing every day. Wind prices have declined 70 percent in the last decade, and solar prices have dropped 88 percent since 2009, which means an increase in economic opportunities. Currently, Wisconsin receives over $1.6 billion in private investment from the renewable energy industry. Most importantly, the Badger state is benefiting from stable incomes for landowners, well-paying jobs for local communities, and of course, low-cost, clean energy.

Although Wisconsin’s installed wind capacity is relatively low nationwide, with only 746 megawatts (MW) online, wind power keeps the lights on in over 150,000 homes. Yet, the state still receives up to $1 million in state and local taxes paid by the wind industry every year, and another $7.6 million in annual land lease payments are being paid to rural landowners.

Wisconsin’s solar capacity, however, is growing rapidly. Solar is already powering over 34,000 homes and another 1,700 MW are projected to come online over the next five years. Solar is currently one of the cheapest electricity sources available. The solar industry has already invested over $388 million in Wisconsin. In addition, solar is the largest clean energy employer in Wisconsin, with 3,798 people working in the state’s 194 solar companies, including 44 manufacturers, 90 installers and developers and 60 other related companies.

America’s energy sector is in the midst of a major transition to a clean energy economy. According to Clean Jobs Midwest, more than 76,600 people were employed in a clean energy job prior to COVID-19 in the Badger State. These jobs grew 1.5 times faster than the state’s overall employment in 2019. Renewable energy, which includes wind, solar and storage, is the second largest clean energy employer in Wisconsin, with 5,958 workers. Although Wisconsin ranks 25th in the nation for its installed wind capacity, it has 28 manufacturing facilities that provide thousands of good-paying, family-supporting jobs making products for the wind industry – the third-highest amount in the Midwest, next to Ohio and Illinois.

By embracing renewable energy development, Wisconsin will benefit not only from its low cost and low carbon output, but businesses will benefit from the economic ripple effect that comes from such development, farmers can diversify their income with land-lease payments that are steady and drought-resistant; and citizens can benefit from the local jobs and an influx of new tax revenue, which can be usedto support schools, roads and other projects that benefit the entire community.

Everyone wins with wind and solar– and that’s just smart!