Clean Energy is a Great Investment for Illinois 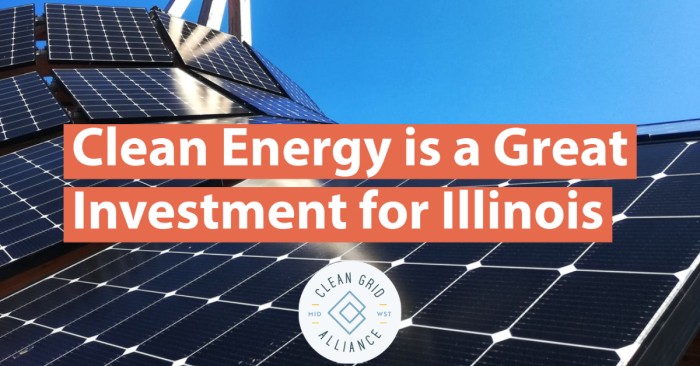 As one of only six states in the country to top 5,000 megawatts (MW) of wind energy and a growing solar sector, Illinois is clean energy leader. As technology advances and prices decline, more opportunities arise to grow the state’s clean energy economy. Illinois currently receives over $10.9 billion in investments from the renewable energy industry. In addition, landowners are benefitting from stable incomes, local communities are seeing a surge in well-paying jobs, and of course, the state is receiving low-cost, carbon-free energy.

Wind prices have declined 70 percent in the last decade, and Illinois’ capacity continues to grow. Wind accounted for seven percent of Illinois’ overall electricity production in 2019, and the state currently ranks 6th in the nation for installed wind capacity, with 5,858 megawatts (MW). That’s enough power for 1,268,900 homes! This is great news for over 8,000 people working in family-supporting careers in the wind industry alone. Wind has also contributed $49 million in annual state and local tax payments and an impressive $37 million in annual land lease payments for rural landowners.

Illinois’ 374 MW of solar energy is already powering over 54,000 homes, and over 2,000 MW are projected to come online over the next five years. Solar prices have dropped 90 percent since 2009, and is currently one of the cheapest electricity sources available. The solar industry has already invested over $887 million in Illinois. In addition, solar is the second largest clean energy employer in Illinois, with 5,917 people working in the state’s 301 solar companies, including 63 manufacturers, 99 installers and developers, and 139 other related companies.

America’s energy sector is in the midst of a major transition to a clean energy economy. According to Clean Jobs Midwest, more than 125,000 people were employed in a clean energy job prior to COVID-19 in Illinois. These jobs grew five times faster than the state’s overall employment in 2019, and there were twice the amount of clean energy jobs in the state than fossil fuel jobs. Renewable energy, which includes wind, solar and storage, is the second-largest clean energy employer in Illinois, with over 17,000 workers. The state also has the second-highest amount of manufacturing facilities in the Midwest. These 35 active manufacturing facilities provide thousands of good-paying, family-supporting jobs making products for the wind industry.

In August 2020, Illinois’ Governor Pritzker issued a paper outlining actions for a clean and renewable Illinois economy. The plan includes a 100 percent clean energy economy by 2050. A recent report by Dr. David Loomis, a professor at Illinois State University, estimated the economic impacts to the state of Illinois if the state were to have 40 percent of its energy come from wind and solar resources by 2033. The report found that expansion of renewable resources in Illinois could produce over 53,000 construction jobs, over 3,200 jobs to operate and maintain the new facilities, in excess of $24 billion in capital investment, and of that $8 billion would be paid for project development, labor, and invested in the local economy. Over $571 million would be spent per year for ongoing operations and maintenance. Property taxes paid over the 30 year life of commercial and utility-scale projects would be in excess of $2.5 billion.

Dr. Loomis’s analysis was based on proposed renewable expansion set forth in recent bills filed in Illinois (house bill 2296 and senate bill 1781). It analyzed the economic impact of adding 5,852 MW of new wind resources and 10,327 MW of new solar resources by 2033. The new solar resources included large-scale, community and distributed solar generation.

If Illinois is placed on the path to a clean and renewable economy, it will not only benefit from low cost energy, but local businesses will be on the receiving end of an economic ripple effect that comes from such development. Citizens would be employed in local clean energy jobs and enjoy an influx of new tax revenue, which can be used to support schools, roads and other projects that benefit the entire community. Farmers will have the opportunity to keep the property in the family by diversifying their income with land-lease payments that are steady and drought-resistant. As a new era begins,

Illinois is charging up with clean energy – and that’s just smart!