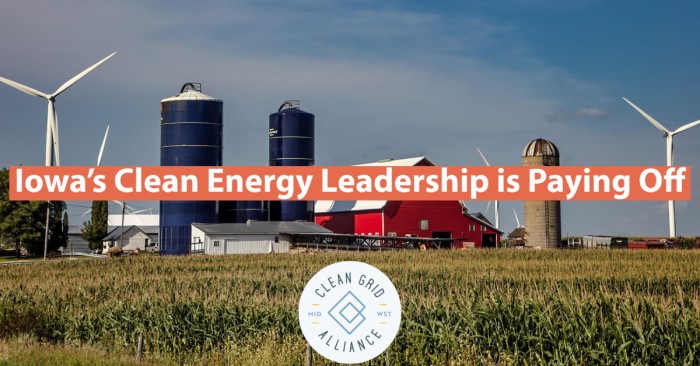 Despite a tough year, the renewable energy industry is resiliently powering through to provide affordable, reliable electricity for customers across the Midwest. Among the vast open fields of America’s Heartland, Iowa remains a clean energy leader. The Hawkeye State clean energy economy is growing, and already earning $19 billion for the state’s economy.

With over 10,000 megawatts (MW), wind energy is Iowa’s biggest power producer. Iowa gets nearly 60 percent of its in-state electricity production from wind power, the highest in the country. State and local taxes produce up to $65 million for the state coffers every year, and an additional $74 million in annual land lease payments are being paid to rural landowners.

Renewables offer much more than economic benefits – clean power generation reduces emissions and uses virtually no water. Wind, solar and energy storage projects saved the state from 12.7 million metric tons of CO2 emissions — the equivalent of taking 2.7 million cars off the road. The equivalent of more than 2 million homes are powered by wind in Iowa.

Iowa’s solar sector has grown over the last year. Even though it ranks 35th in the nation for installed solar energy, capacity reached nearly 288 MW at the end of 2020. That’s enough to power up to 37,000 homes. But, this is just a glimpse of what’s to come. Over the next five years, Iowa’s solar capacity is slated to increase by 342 MW. Solar prices have dropped 90 percent since 2009, making it one of the cheapest electricity sources. The solar industry has already invested over $435 million in Iowa, and the industry employs 1,029 people through its 50 solar companies, including 10 manufacturers, 31 installers and developers and 9 other related companies.

Iowans also benefit from the great jobs offered by the renewable energy sector. New, family-supporting jobs are emerging across the state. At the same time, local businesses benefit from the economic ripple effect that comes from renewable energy development. According to Clean Jobs Midwest, more than 32,000 Iowans were employed in a clean energy job prior to COVID-19. These jobs grew 20 times faster than the state’s overall employment in 2019. Renewable energy is the second largest clean energy employer in Iowa, with 5,796 workers. Iowa’s largest cities like Des Moines and Cedar Rapids have the largest number of clean energy jobs, but rural areas enjoy an impressive 44 percent of these jobs.

As an early adopter of wind energy, Iowa has also invested in educational programs to build a workforce to support this growing industry. Iowa Lakes Community College offers a Wind Energy and Turbine Technology program through its Sustainable Energy Resources Technology building. In addition to promoting wind workforce training for students, the state has worked on modernizing the current U.S. wind technician workforce and creating more accessible career opportunities for veterans through veterans-focused jobs programs.

“Iowa is one of the nation’s leaders in developing and utilizing sustainable energy resources, like wind energy, to create good-paying jobs for folks in our state. The backbone of this industry is the workforce that powers it,” said Iowa Senator Joni Ernst.

As the United States energy sector transitions to a clean energy economy, states continue to implement strategies to incorporate more renewables and set carbon-reduction goals. Iowa embraced this new energy future, which encouraged more growth for the state’s economy. In fact, Iowa was one of the first states to adopt a renewable energy law. Despite the small requirement that major utilities acquire 105 megawatts of renewable energy sources, Iowa’s leadership in the energy sector has translated to significant and meaningful benefits for Iowans across the state– and that’s just smart!