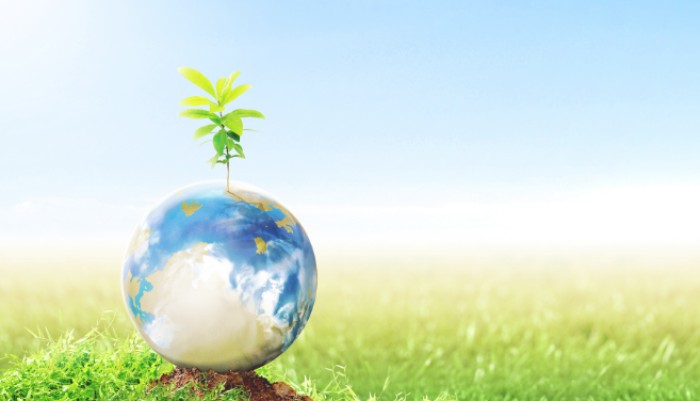 This Earth Day, we are coming off the third most expensive year when it comes to climate disasters, according to the Sustainable Energy in America 2022 Factbook by BloombergNEF and the Business Council for Sustainable Energy. The factbook showed that in 2021, climate disasters caused an estimated $145 billion in damages. In the United States alone, there were 20 different climate disasters that each caused over $1 billion in damages. An increase in the amount and severity of climate disasters such as tropical cyclones, severe storms, droughts, and wildfires can all be attributed to climate change and the rising temperature of the Earth's atmosphere, which can be further tied back to greenhouse gas emissions. Thankfully, in 2021, greenhouse gas emissions were 15% lower than in 2005. Power sector emissions have fallen 35% during that period, and transport- and industry-related emission declined 13% and 3% respectively. Even though U.S. greenhouse gas emissions are declining, there is still a lot of work to be done in order to protect our planet from further climate damage. That work starts with the implementation and expansion of renewable energy projects and the electric grid so clean energy can be delivered to homes and businesses.

The largest contributor to climate change is greenhouse gases. Greenhouse gases (GHGs) trap heat in the Earth's atmosphere, causing an increase in the concentration of those gases in the air that we breathe. In 2019, carbon dioxide accounted for 79% of all U.S. greenhouse gas emissions. Carbon dioxide enters the atmosphere when fossil fuels such as natural gas, oil and coal are burned for electricity production, heating, transportation and other purposes. Carbon dioxide also enters the atmosphere through certain chemical reactions, solid waste, trees, and other biological materials. In 2019, electricity production was the second leading source of carbon emissions in the U.S., accounting for over 31% of U.S. carbon dioxide emissions. 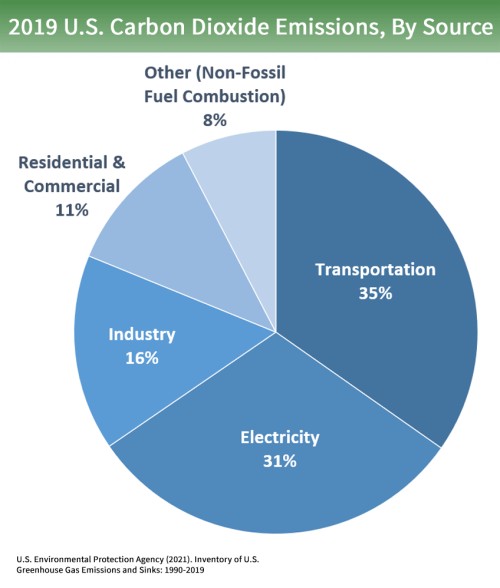 One way to reduce the amount of carbon dioxide emissions entering the atmosphere is to transition to clean power. Clean power works to create a healthier environment by replacing older, outdated power generating plants with newer, cleaner energy generators such as wind and solar. When wind turbines and solar panels generate electricity, they produce zero carbon emissions.

While wind and solar projects do have a carbon footprint, it is significantly smaller than that of non-renewable forms for energy generation and can be recuperated in a relatively short period of time.

Solar projects, on average, have a life-cycle emissions factor of 43 g of carbon dioxide equivalent emissions per kilowatt-hour (CO2e/kWh). Once installed, a solar project will produce zero carbon emissions.

Wind energy projects have an average life-cycle emissions factor of 13 grams CO2e/kWh. The vast majority of these emissions come during manufacturing, transportation, and construction of wind turbine materials. Once installed, a wind turbine project will produce zero carbon emissions and will repay its carbon footprint within six months or less. 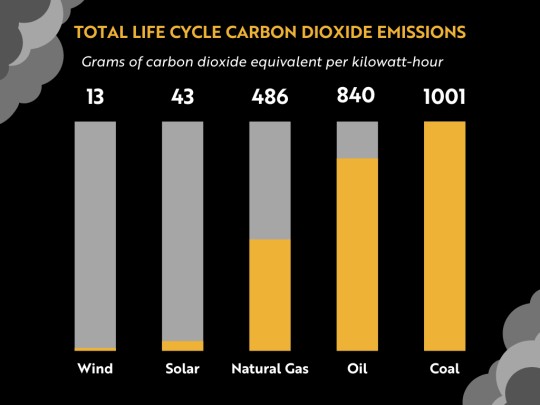 Generating electricity from wind and solar projects instead of fossil-fuel power plants avoids the emission of 405 million metric tons of carbon dioxide per year. Carbon emission savings of that amount can prevent over $20 billion in future climate-related damages per year. Eliminating 405 million metric tons of carbon dioxide is the equivalent of:

At a time when we have experienced severe drought conditions across the country, water savings is increasingly important. Conventional power plants use immense amounts of water to cool and condense steam that they can then use to create more electricity. In 2020, power plants used 47.5 trillion gallons of water to assist in their cooling process. This accounts for roughly 40% of the United States total water consumption. Unlike conventional power plants, wind and solar generation do not require water for cooling. The increase in renewable energy generation accounts for roughly 80% of the decrease in water withdrawals. Adopting wind and solar projects can save up to 200 billion gallons of water each year. That is enough water to fill 300,000 Olympic sized swimming pools.

Generating electricity from clean resources also provides public health benefits by preventing toxic chemicals from being released into the air and improving air quality. Wind and solar power prevent significant amounts of harmful air pollutants such as sulfur dioxide (SO2) and nitrogen oxides (NOx) from being released into the Earth's atmosphere. By decreasing the amount of these pollutants, we can help reduce pollution and smog and decrease the rates of asthma attacks and other respiratory issues. Currently, there are 200,209 MW of installed wind and solar capacity in the U.S., which prevent 255,000 metric tons of SO2 and 284,000 metric tons of NOx from being emitted into the atmosphere. That is the same amount of NOx emitted by an average semi-truck driving nearly 31 billion miles.

The more renewable energy generation we use, the more we can benefit our environment. That's why sharing information on environmental benefits of renewables is the best way we can think of to celebrate Earth Day. 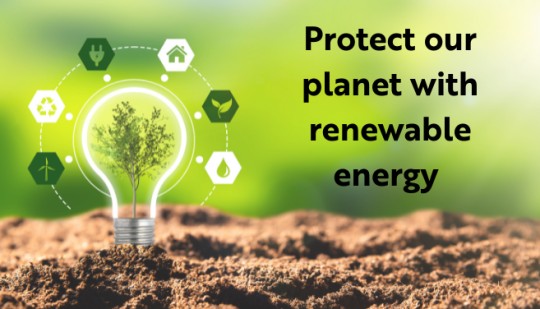