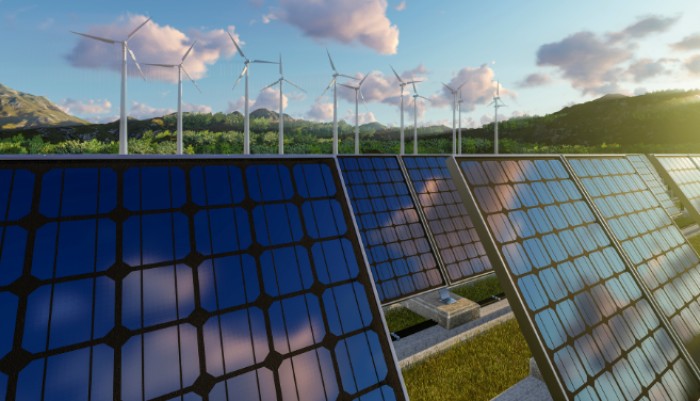 As we celebrate Independence Day this month, the concept of independence and freedom are top-of-mind. In the context of energy, being reliant on our own country and our own resources to generate our energy also creates security. Independence, freedom, and security are deeply rooted in American culture; and renewable energy is an important part of it.

Let's use what's in our own back yard

Currently, renewables provide 12% of our overall energy needs. The transition to and growth of renewables certainly deserves praise, but we are still reliant on many fossil fuel sources and under-invested in renewable energy. With significant renewable energy resources available in the U.S., electric utilities can shield customers from energy price hikes due to geopolitics in the Middle East or other unforeseen circumstances. Renewable energy is a low-cost, reliable source of energy that is homegrown and bolsters our energy independence by diversifying our energy mix, employing Americans, and avoiding extreme price fluctuations in our electricity supply.

One of the biggest challenges in the transition to clean energy is the supply chain for materials and parts that are used to create and maintain solar panels, wind turbines, battery storage, and grid infrastructure. Demand for clean energy has skyrocketed in the past few years as costs have declined. The increased demand for the equipment and components needed to transition to renewable energy coupled with the pandemic, however, has caused a significant strain on the global supply chain. Consequently, many renewable energy projects have been delayed, experienced unexpected cost increases, or have been canceled entirely.

Currently, supply chain issues are mainly centered around solar panels. According to the National Renewable Energy Laboratory, U.S. production of solar cells dropped from 13% in 2004 to less than 1% in 2021. There have been a few new solar-related manufacturing facilities that have opened in the Midwest recently. First Solar currently has two solar manufacturing plants in Ohio and is set to open a third in 2023. Between the three plants, it is estimated that First Solar will produce one solar module every 2.75 seconds! The new plant, located in Perrysburg, Ohio, will have an annual capacity of 3.3 GW and will create 700 permanent jobs and 500 construction jobs, in addition to the 1,600 people First Solar currently employs in Ohio. Heliene, a solar manufacturer in northern Minnesota currently employs more than 60 people at their Mountain Iron manufacturing plant and produces 150 MW annually. They are currently working on a plant expansion that will double the number of employees and more than triple the annual production, reaching 550 MW. The solar industry is new, but now is the time to take advantage of this growing sector.

The supply chain for wind turbines is more mature and therefore is more robust, with more than 500 wind turbine component manufacturing facilities in the U.S. In fact, the United States Office of Energy Efficiency and Renewable Energy reports that over 80% of nacelle assembly and wind tower manufacturing for U.S. based wind turbines are manufactured here in America. That's great news.

Growing the domestic supply chain to support renewable energy resources is a great way to build energy independence in the United States.

The combination of using domestic energy resources and producing the materials for those plants here in America will also have a significant impact on our economy through increased tax revenue, and creating thousands of jobs.

Looking to the future, independent research organization, Rhodium Group, created an investment scenario of tax credits and incentives that would reduce carbon emissions by 69-76% from 2005 levels by 2031. They also developed an employment projection model that revealed a minimum of 548,000 jobs would be gained through the manufacture, installation and operation of new renewable energy sources from 2022-2031. Additionally, there would be 75,000 more transmission jobs and 28,000 more battery storage jobs. All together, they projected that an average of 1.7 million Americans would be working in the manufacture, installation and production of clean electricity between 2022 and 2031. That is almost one million more Americans working in clean energy than there are today, and 679,000 more than there would be if our energy policies remained as they are today. Under this clean energy investment scenario, the clean energy industry would employ as many people as the U.S. fossil fuel production, transportation, distribution and generation combined. 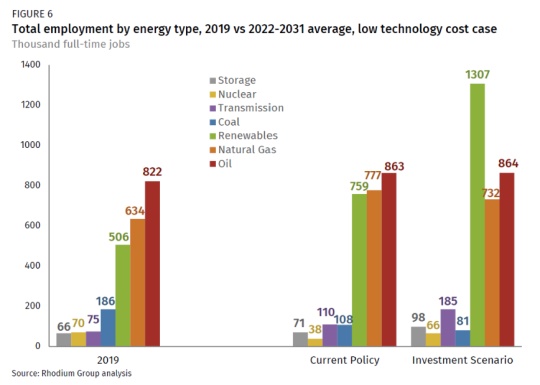 The national security benefits of renewable energy have long been recognized by national security experts, the U.S. congress and many senior officials at the U.S. Department of Defense (DOD). In fact, Secretary of Defense Lloyd J. Austin III said, "We also have a once-in-a-generation opportunity to build an entire economic sector and the global infrastructure for clean energy. The truth is that our shared commitment will allow us to create a safer, more resilient, secure and sustainable future."

Renewable energy generation also enhances the reliability of the electrical grid, especially when combined with energy storage. In cases where an unwavering and continuous power supply is vital for national defense operations, renewable energy generation and storage can be combined to form self-sustaining microgrids. Having microgrids and renewable generation facilities dispersed throughout the U.S. will also ensure that our power supply is less vulnerable to acts of terrorism. Additionally, generating and transporting renewable energy as opposed to fossil fuels avoids the risk of dangerous pipeline leaks and explosions that threaten health and public safety and have negative environmental impacts.

The bottom line is that investing in renewable energy and developing a domestic supply chain would bolster our economy. Energy independence also means we can enjoy lower prices, create American jobs, and help keep our country safe and secure. And, that's a fact.