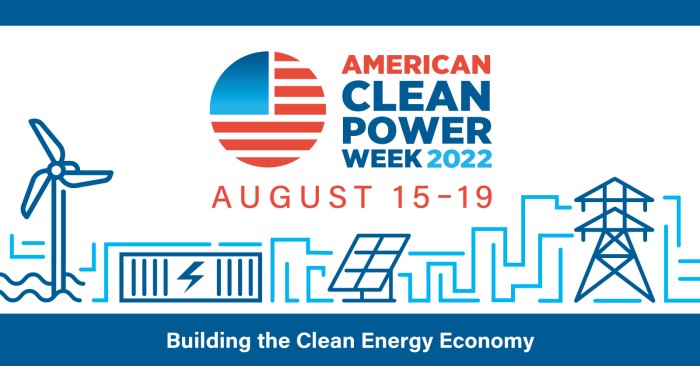 In advance of American Clean Power Week, the American Clean Power Association released their Clean Power Quarterly Market Report for the second quarter of 2022. Overall, the report showed that clean energy development slowed in the second quarter compared to previous years, largely due to trade issues, policy headwinds, and economic factors facing the industry. Even though development may have slowed, it definitely didn't stop and the clean energy industry continues to move forward.

Each quarter, clean energy capacity is growing in the United States by thousands of megawatts (MW). The second quarter of 2022 brought 3,188 MW of new clean power capacity, which is enough to power 1.9 million homes! Of that, 1,575 MW was solar capacity, 620 MW was wind, and 992 MW was battery storage. These capacity additions represent a total capital investment of over $4.3 billion. 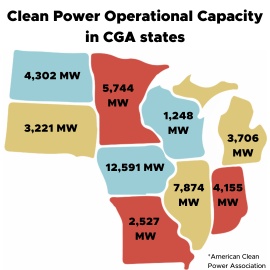 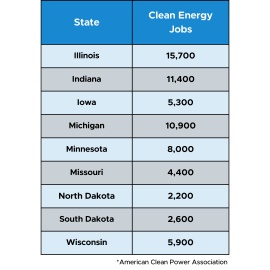 As clean energy production and capacity increases, so do the number of jobs in the clean energy industry. According to the American Clean Power Association (ACPA), nearly 443,000 Americans are employed by wind, solar, and energy storage in the United States. There are more than 253,000 Americans working in the solar industry, more than 120,000 in the wind industry, and almost 70,000 in the energy storage industry. The Inflation Reduction Act (IRA) will further expand the clean power workforce by adding an additional 555,000 jobs.

Not only are there an abundance of clean energy jobs, they are well-paying jobs too. Clean energy workers make roughly 30% more than the national median wage, ensuring that workers are able to support themselves and their families. Clean energy jobs are available all across the country and can help revitalize former industrial towns by bringing manufacturing jobs back to American communities. Currently, there are nearly 67,000 Americans working in wind and solar manufacturing jobs and the IRA could create another 150,000 jobs in manufacturing plants.

Clean power also drives investment into local economies. Wind, solar, and storage projects have delivered over $412 billion in economic investment to date. Cities and towns also benefit from tax revenue associated with clean power. Wind, solar, and storage projects pay an estimated $1.3 billion in state and local taxes in the U.S., providing communities with new income to help bridge budget shortfalls, fund essential services, and invest in their future. The passing of the IRA means that new clean energy projects could create an additional $17 billion in state and local tax revenue. 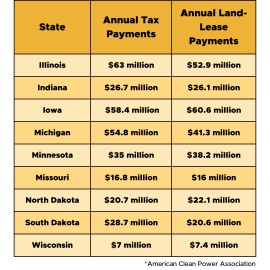 Wind and solar projects also provide income directly to landowners in exchange for the use of their land for hosting wind turbines or solar panels. According to ACPA, the clean power industry pays an estimated $1.4 billion in land-lease payments to landowners in the U.S. every year. These land lease payments serve as a drought-proof cash-crop that provides a stable income for American farmers, ranchers, and landowners.

Communities also benefit economically from the affordability of clean energy. There are now 210 GW of clean energy capacity in the U.S., enough to power 58 million homes, which means that clean, inexpensive energy has never been more accessible. Energy storage also helps to keep prices down by storing energy when the price of electricity is low and releasing that inexpensive energy during periods of high demand when electricity is more expensive. Energy storage can also provide back-up power in the event of power outages and can prevent costly damages to businesses and families.

Clean Power is Reliable, Affordable, and Secures our Energy Future 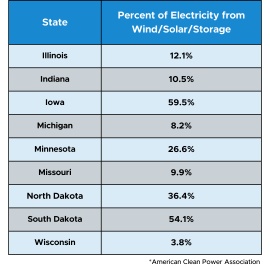 Renewable energy is a reliable and increasing source of power in the United States and is 100% domestically produced. Over the last decade, wind and solar costs have fallen 65% and 85% respectively. According to the U.S. Energy Information Agency, over 12% of U.S. electricity in 2021 came from wind or solar power. Despite its variability, renewable energy is very predictable. Changes in the generation of renewables are typically slow and predictable which gives grid operators time to plan and bring other resources online if needed. The predictability and consistency in price are another benefit of renewable energy. Unlike fossil fuels, renewables are insulated from geopolitics as we don't have to import the wind or sun from overseas. This protects the market from volatility and keeps electricity prices low for millions of Americans. Investments in domestic clean power reduce energy dependence outside of our boarders and are essential for America's security and prosperity.

Clean Power is Building a Better Future for Our Planet 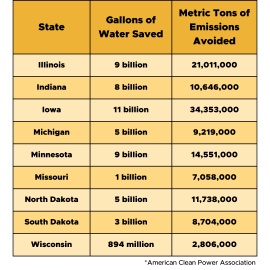 Renewable energy generation sources such as wind and solar power produce zero carbon emissions, which will greatly benefit our climate. Each year, wind and solar power prevent more than 413 million metric tons of carbon dioxide from being emitted into our atmosphere. That is the equivalent of taking more than 90 million cars off of the road each year. Clean power sources also save more than 208 billion gallons of water each year as they do not require water for cooling like traditional power plants.

Clean power doesn't just benefit the environment, it also saves lives. On average, more than 60,000 Americans die each year from causes attributable to air pollution. Wind and solar power cut significant amounts of harmful air pollutants that impair the respiratory system and exacerbate asthma, such as sulfur dioxide (SO2) and nitrogen oxides (NOx), from entering our atmosphere.

The countless benefits of clean power are undeniable. Clean power creates jobs, tax revenue, and emissions-free power; and saves money and lives, as it improves our environment. As CGA Policy Associate Madelyn Smerillo said in her Clean Power Week blog last year, "As the clean energy industry expands, not only will we power our lives and our economy with environmentally-friendly electricity, but in doing so we are becoming the United States of clean energy."