A good start, but it's not nearly enough 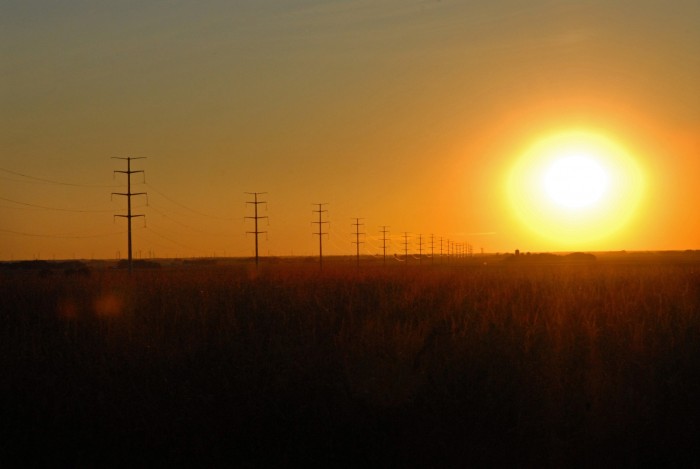 Electricity is an essential part of daily life. Yet, rarely do we consider what it takes to keep those electrons flowing. Just as the U.S. rail and highway systems help move grain from where it is grown and harvested to the markets in cities and towns, transmission provides an identical and essential service in transporting wind energy from its source to the grid, where it can be offered as a low-cost source of power for our homes, businesses and devices.

The Heartland has some of the best wind resources in the nation. According to the U.S. Department of Energy’s (DOE) Wind Vision report released earlier this year, wind energy could supply 20% of the nation’s electricity by 2030 and up to 30% by 2050. The wind industry has been working hard to develop wind in new areas to meet these growing demands. Just the same, the Center for Rural Affairs states that only 6% of transmission lines are located in the top 10 wind states. Without the proper transmission in place, wind energy could be all charged up with nowhere to go.

Building the “road to market”

The MVP lines are an important and much-needed step toward improving the transmission system, as they remove bottlenecks and provide a “road to market” for wind energy. To be deemed an MVP, transmission lines must have been determined by MISO to meet one of three criteria: The project must be necessary to maintain reliability, provide economic savings to ratepayers, or help states meet policy objectives, such as renewable portfolio standards (RPS).

The N. LaCrosse-N. Madison-Cardinal (Badger-Coulee) and Cardinal-Hickory Creek project received approval from the Wisconsin Public Service Commission on the joint application of American Transmission Co. and Xcel Energy-Wisconsin to construct and operate the line; construction will begin in 2016. The Lakefield Jct.-Winnebago-Winco-Burt area and Sheldon-Burt area-Webster line has been approved and started construction in November.

The CapX2020 transmission lines have been under construction in Minnesota and the surrounding area in an effort to meet local and regional needs. When all six projects are finished in 2017, the CapX2020 lines will energize nearly 800 miles of transmission capable of transporting more renewable energy to load centers. To date, four transmission projects have been completed: Bemidji-Grand Rapids (230 kV), Brookings County-Hampton (345 kV), Fargo-St. Cloud (345 kV) and Monticello-St. Cloud (345 kV). Big Stone South-Brookings County (345 kV) is targeted to be in service by 2017, and Hampton-Rochester-La Crosse (345 kV) just began construction and will be in service by 2016. These upgrades will benefit reliability and costs and incorporate more renewables. Still, more transmission lines are needed in order to support the high demand for renewables in the Midwest.

The age-old question of “which came first, the chicken or the egg?” is an excellent metaphor for the development of wind and transmission projects. No one quite knows the answer to that question, but there’s an argument to be made on both sides.

Certainly, the availability of transmission to a wind development project is a key consideration in where and when a project gets built. Yet, rich wind resources combined with policy initiatives, such as renewable portfolio standards (RPS) and the production tax credit, have encouraged wind development to move forward and have built the industry into a viable player in the energy market nationwide.

Certainly, the availability of transmission to a wind development project is a key consideration in where and when a project gets built. Yet, rich wind resources combined with policy initiatives, such as renewable portfolio standards (RPS) and the production tax credit, have encouraged wind development to move forward and have built the industry into a viable player in the energy market nationwide.

However, there have been consequences. As more wind projects have come online, there has been a rise in wind curtailments in the MISO footprint due to transmission constraints – a bottleneck in the grid in which generation can’t make it to the grid because there isn’t enough space on the lines to accommodate the electrons. That’s why more transmission is needed to deliver cost-effective wind energy.

The Texas Competitive Renewable Energy Zones (CREZ) transmission project bet big on the “if you build it, they will come” model. An unusual model for transmission development, these lines were built with the “big picture” in full view.

The Texas Public Utilities Commission clearly understood the very long lead time to build transmission infrastructure. It recognized the vast wind development potential in the state. Also, it realized the need to provide the “road to market” if it wanted to capitalize on the new wind energy resource. It gambled that if it built the lines, the wind developers would come. And it worked. The CREZ transmission lines were completed in 2014 after nearly a decade of work, $6.8 billion in investments and 3,600 miles of transmission lines erected. These transmission lines allow 18,500 MW of wind power to cross the state and feed the appetite of hungry consumers. Combined with the state’s RPS, the CREZ lines have enabled Texas to benefit from an enormous wave of wind development, which has turned the state into the nation’s leader in installed wind capacity.

Although the CREZ program had a more (relatively) simple regulation process because all of the projects were within one state’s borders, multistate projects, such as Clean Line Energy’s high-voltage, direct-current lines, face a multitude of regulations that can slow the approval process.

Clean Line Energy has been working on developing transmission line projects across the Heartland that will enable thousands of megawatts of renewable generation to be built and delivered to customers with a demand for low-cost clean energy.

The Rock Island Clean Line was approved by the Illinois Commerce Commission in November 2014. Three parties filed for appeal in February of this year, and a decision should be made later this year. The Rock Island Clean Line is continuing to work through the regulatory process in Iowa. The Grain Belt Express Clean Line has received approvals in Illinois, Indiana and Kansas. Missouri denied a certificate of convenience and necessity for the Grain Belt Express project in a 3-2 vote in July. However, Missouri invited Clean Line to reapply at a later date.

In November, the DOE released its final environmental impact statement for the Plains & Eastern Clean Line, bringing the transmission project one step closer to construction. The Western Spirit Clean Line is working to achieve the regulatory approvals needed to move forward, and Clean Line has an agreement with the Western Area Power Administration that outlines a working relationship to advance the development of the proposed Centennial West Clean Line.

The prospects for a continuing surge of wind development are real due to utilities that are interested in continuing to purchase cost-effective wind and states needing to meet carbon reduction requirements. That is great news for the wind industry. The U.S. Energy Information Administration has reported that wind energy stands to reach a penetration of 57% by 2030 nationwide – and that’s a conservative estimate. Recent policy developments, the increasing cost-competitiveness of wind energy and significant interest by corporate purchasers to invest in renewable energy may allow even further penetration.

The bulk of wind energy development is likely to occur in the MISO footprint, given the region’s excellent wind resource. Therefore, MISO has analyzed five different policy scenarios for future wind expansion, and results indicate that wind may grow by 19 GW to 39.5 GW incrementally by 2030.

In its MISO Transmission Expansion Planning process for 2017, MISO is already planning for a wind rush, but it may need to study a higher level of renewables, as well. The system operator is currently analyzing how much and where transmission projects would be needed to help move more renewables to market within the 2020 to 2030 time frame.

As we all know, in-service dates will vary by the complexity of the project and the process of obtaining state and local regulatory approval is time-consuming, as is the process of obtaining rights of way and materials. That’s why the U.S. can’t rest on its laurels. With the MVPs and other major transmission projects completed or well under way, it’s time to build the next major set of transmission lines.

This article was written for and first appeared in North American Windpower, December 2015.