Red barns, grazing cattle, and the proverbial ‘amber waves of grain’ personify everything good and wholesome about life in rural America. Yet, across the country, many small towns are struggling. Young people are leaving in search of good, family-supporting jobs. Schools and churches are closing or consolidating. Roads are falling into disrepair. Businesses are shuttered and left vacant, staple businesses like grocery stores struggle to survive, and even rural hospitals are closing at the rate of nearly one every month nationwide according to a recent report.  But, the outlook doesn’t have to be so bleak.

Rural communities have much to gain from welcoming a wind project into their community.  Wind development projects inject millions of dollars into the local economy. This happens in a few ways.  First, developers strive to buy local goods and services whenever possible. They use local restaurants, grocery stores, hotels, hardware stores, service stations, building and construction supply companies, print shops, and other services as much as possible. This gives a real boost to local businesses.  After construction, good-paying permanent jobs remain for service technicians and administrative personnel.

Second, wind energy has become a new “cash crop” for many farmers and ranchers. U.S. wind farms now pay an estimated $245 million a year to farming families.  At the end of 2015, AWEA reported that 70 percent of that revenue goes to landowners who live in counties with below average incomes, providing a welcome source of new income.  In Minnesota, land lease payments range from $5 - $10 million per year. This kind of income ripples through the local economy, as a 2014 study by Dr. Sarah Mills from the Gerald R. Ford School of Public Policy at the University of Michigan points out.  Her research reveals that landowners with wind turbines on their property invest twice as much money into their farms for things like home improvements, outbuildings, and equipment, than landowners who lived in townships without windfarms. They also purchase more farmland and plan for their farm to continue in the future.

Third, wind farms contribute to the tax base.  In this case, everyone benefits from the long-lasting new sources of property tax revenues that developers pay.  In Minnesota, more than $10 million was paid to 23 counties that host wind farms in 2016. Those funds are used by local communities for a variety of needs including schools, road and bridge improvements, and some counties use the revenue to keep a lid on property taxes.  In Jackson County, Minnesota, for example, wind revenue is used for repairing roads and building public infrastructure, such as a new $14 million public works facility, which was paid for without asking residents to chip in.  In addition, the wind farm revenue prevented a 14.5% increase in property taxes.  Elsewhere,  in Van Wert, Ohio for example, tax payments from a local wind farm has provided laptops or tablets for every student in their district; and the town of Sheldon (population 2,500) in rural New York hasn’t paid local taxes for 8 years, all thanks to the local wind farm.

Farming is a business.  Farmers expect their land to produce a product they can sell, and in doing so, they can support their families.  Wind farms can help the land perform double-duty – providing drought-resistant income for farmers and a source of jobs and new revenue for the entire community.  That makes wind energy a smart choice for rural Minnesota.

Learn how one Minnesota town benefits from wind energy, here. 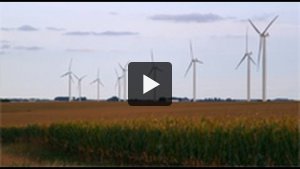