In the beginning, there was light – the evolution of corporate energy purchasing

After decades of relative status quo, our nation’s energy system is evolving.  In the beginning, power plants were built to provide energy to an individual community.  Once regulated utilities became the norm beginning in the 1930s, the grid operated relatively unchanged until 1978.  Public Utilities Commissions and utilities determined how much energy was needed, agreed on the costs, the utility built the power plant, delivered the electricity to its customers, we paid the bill, and that was it. In 1978, the Public Utility Regulatory Policies Act (PURPA) spurred the first entry into a more free market system, in which private companies called Independent Power Producers could build, operate and compete with utilities on the basis of price. Then in the 1990s, the Independent System Operator (ISO) model came into being.  In this model, ISOs “dispatch” the generation and manage the transmission on the integrated grid. ISOs manage a wholesale electricity market to ensure supply and demand are met and does so in a way that the lowest-cost energy serves the demand first. Today, the U.S. energy system has entered a new stage and more free market principles are reducing costs for ratepayers.

The ability to lock in the low price of wind energy for 20 – 25 years has turned the tables on conventional energy production, competition, and distribution in America.  Until the advent of Power Purchase Agreements (PPAs), there was no way for environmentally-minded companies to enter the energy marketplace and secure cost-effective renewable resources. Prior to PPAs, a company’s only option was to purchase electricity from an electric utility, and they had no input on the source of the electricity. 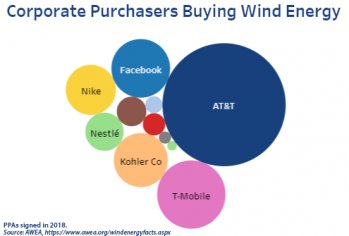 The first PPAs for wind were signed in 2008, and 10 years later, non-utility purchasers have acquired more than 9,000 megawatts of wind power through PPAs, direct ownership, large-scale Renewable Energy Credits and green tariffs. Today, Fortune 500 brands such as Facebook, General Motors, Anheuser-Busch, and Target are using PPAs to invest in and even own wind projects. In one fell swoop, they can achieve their corporate sustainability goals by investing and running their businesses on clean, renewable energy, and at the same time lock in low-cost energy to help their bottom line.

Wind energy is now a competitive, mainstream energy source.  Although the federal Production Tax Credit is half-way through its five-year phase-out, wind is still poised to continue to compete on its merits and grow even as it becomes the first energy resource in the country to voluntarily eliminate a federal subsidy. That’s because the cost of wind power has fallen by 67 percent since 2009.  In the Interior of the U.S., wind is not only competitive with other generation resources; it is the most affordable options for new electricity generation. One of its most attractive features is the fact that wind power has no fuel costs, so buyers can lock in low rates for decades to protect against a volatile fuel market. This is a concept similar to locking in a low-interest rate for a home mortgage; it’s a financially secure way to reduce the risk of rising prices in the future.

According to the American Wind Energy Association, corporate and other non-utility purchasers signed long-term contracts for 2,178 megawatts of wind power in 2017. The growth of PPAs continued in the first quarter of 2018, with 3,560 megawatts of PPAs signed. That’s the highest volume of PPA announcements in any quarter since AWEA began tracking them in 2013. Six companies including Adobe Systems, AT&T, Kohler, and Nestlé signed wind PPAs for the first time in the first quarter, while Bloomberg, Facebook, Nike and T-Mobile became repeat customers.

We look for [wind projects] because, in addition to creating more renewable energy and strengthening the local economy, they also make for smart investments: They offer attractive returns relative to the risks and allow us to invest in a broad range of assets.

Recently, Morning Consult compiled a list of the 25 Most Loved Brands in America.  Not surprisingly, several of the companies on this list are also purchasers of wind energy, including Google, which continues to dominate the PPA market.  In 2017, Google Energy became 100 percent powered by renewable energy, with 95 percent of that total coming from wind energy.  Other beloved brands that are corporate purchasers of wind energy include Amazon, General Mills, Home Depot and Nestlé .

These household brands and businesses are hearing what Americans want: more clean energy to power a modern, 21st-century future. A Pew Research survey from 2017 finds that 83% of Americans say the increasing use of renewable energy sources is a top or important priority for the country's energy policies. States also should be listening. A recent Reuters article describes how wind farms have increased the tax base and created new sources of revenue for rural areas. For example, corporate purchasers have invested nearly $10 billion on data centers in Iowa because of its access to low-cost wind power.

Successful companies know what works, and clean, low-cost wind energy works for them. Wind energy and the use of Power Purchase Agreements to drive demand is playing a vital role in America’s evolution toward a clean energy economy.