Your trusted source for fact-based information about renewable energy.

Do wind and solar disrupt wildlife?

Solar and wind can coexist with a variety of conservation efforts.

USFWS:  "Today, Americans can enjoy seeing more bald eagles than at any time in the past 50 years."* 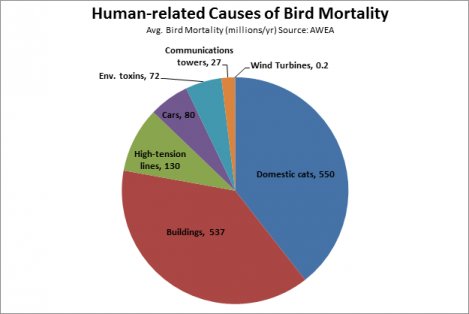 It goes without saying that no human activity is completely devoid of potential impact on the environment. However, studies routinely show that wind energy has among the lowest impacts on wildlife and their habitats of any large-scale electricity generation activity. That’s why conservation groups like the National Wildlife Federation and the National Audubon Society support responsibly-sited wind farms.

Bird mortality has been shown to be very low compared to avian deaths caused by cats, cell phone towers, or high rise buildings -- which are magnitudes higher.

According to a 2007 National Academy of Sciences study, less than three in 100,000 of human-caused bird fatalities are attributed to wind energy.

The wind industry takes the issue of bird and bat mortality very seriously.  Wind developers proactively work with regulators and environmental groups to strengthen conservation programs. The industry is actively engaged in groundbreaking research to reduce bird and bat collisions at wind farms. The Bats and Wind Energy Cooperative (BWEC) was formed in 2003 by Bat Conservation International, the U.S. Fish and Wildlife Service, the American Wind Energy Association, and the Energy Department's National Renewable Energy Laboratory to research bat losses and investigating several promising techniques to reduce them, such as acoustic deterrents and potential mitigation through changes in operations.

The American Wind Wildlife Institute is a partnership of many of the nation's largest wind energy and utility companies and  science-based conservation and environmental groups that focuses on strategies for responsible wind development while protecting wildlife and wildlife habitat.

What about the US Fish and Wildlife Service Eagle Permit Rule released in December 2016?

The USFWS says it expects to issue only a handful of permits every year as turbines at 90 percent of wind farms are never struck by any kind of eagle. Bald eagles in particular almost never strike a wind turbine.

The truth is, thousands of eagles die every year for a variety of reasons — most from natural cuases. The vast majority of human-caused deaths result from intentional poisoning and shooting — federal crimes that we aggressively investigate and prosecute. Most other eagle deaths are caused by collisions — with cars, buildings, power lines and other structures. Wind energy facilites represnt a fraction of these deaths, and the media's singular focus on wind turbines is a gross distortion of the truth.

« Back to Previous Page|Show All FAQs »