In response to the report, Wind on the Wires Executive Director Beth Soholt provided the following statement:

"Despite the need to fix the Renewable Portfolio Standard to achieve its overall potential, Illinois still ranks first in the Midwest with over 113,000 clean jobs; 11.30 percent are in the renewable energy sector," said Wind on the Wires Executive Director Beth Soholt. "Wind energy costs have dropped by 66 percent over the past six years, and solar costs have declined 53 percent since 2010.  These dramatic reductions in cost are likely to drive further development, and increase the number of good-paying, family-supporting renewable energy jobs along the way.

"Strong state policies, like Renewable Portfolio Standards, provide powerful signals to businesses that are looking to make investments that a state is open for business. With the recent extension of the Production Tax Credit for wind and the Investment Tax Credit for solar, now is the time to take advantage of bargain record-low for renewable energy, especially wind."

Renewable Energy Highlights from the Report Include:

The Midwest is clearly at the forefront of our nation's clean energy future. The industry is bringing new jobs and economic growth to our own backyard.

About Wind on the Wires
Wind on the Wires is a 501(c)(3) nonprofit organization based in St. Paul, Minn., which is comprised of wind developers, environmental organizations, tribal representatives, public interest groups, clean energy advocates, farm groups and businesses providing goods and services to the wind industry. Our mission is to overcome the barriers to bringing wind energy to market by addressing technical and regulatory issues, as well as through education and public outreach.

Iowa’s Clean Energy Leadership is Paying Off
Despite a tough year, the renewable energy industry is resiliently powering through to   […]   Read More »

Transmission and RTOs play a pivotal role in a clean energy future
Guess what?  America is on the road to a clean energy transformation. Our   […]   Read More » 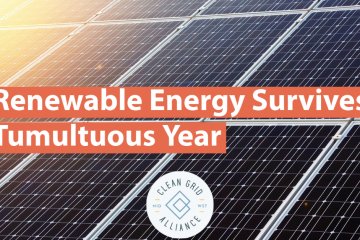