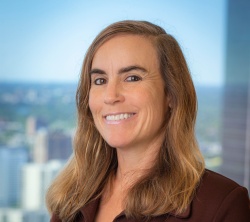 Rhonda has a Bachelor's Degree in Electrical Engineering from California Polytechnic State University, a Master's Degree in Electrical Engineering from San Diego State University, and a Ph.D. in Energy Engineering (minor in Public Administration) from the University of North Dakota. She worked for Clipper Windpower from 2007-2012 where she supported the interconnection and transmission of wind energy projects in all major markets of the United States, and participated in ISO/RTO stakeholder meetings, as well as FERC filings, to represent the interest of those projects. She founded and chaired the Central Coast Chapter of the IEEE Power and Energy Society (PES) in 2011, and was the Vice Chair of the Central Coast Chapter of the IEEE from 2008-2011. Rhonda has also worked in the aerospace industry (Sundstrand Power Systems), owned an environmental retail store, lived in India, and taught college level engineering and mathematics courses. She currently resides in the Denver, CO area where she founded a consulting business (InterTran Energy Consulting) and enjoys organic gardening and snowboarding when she is not working on projects or advocating for increased wind and renewables on the electric grid.