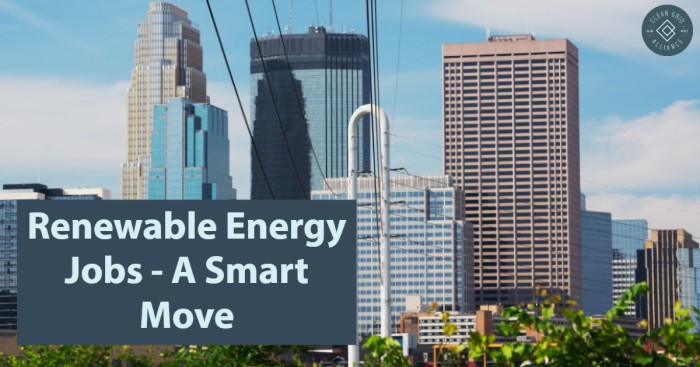 Looking for a job in a growing industry? The renewable energy industry is a smart move. Minnesota’s clean energy jobs are reaching new heights. In the last year, the renewable job market grew two and a half times faster than the overall economy, and twice as fast in Minnesota, ranking 6th in the Midwest. Now standing at an astounding 61,047 jobs (a 4.7 percent increase) in sectors including wind, solar and storage, Minnesota continues to be a national leader in the advancement of sustainable resources.

Minnesota’s renewable energy generation jobs increased by 11.8 percent in 2018, making it the strongest job growth in the Midwest. Wind and solar remain the two largest employers in the renewable energy sector as they dominate the U.S. electricity market, with solar being the rising star. Minnesota ranks 13th in the nation in solar energy, and was responsible for more than half of all Midwestern solar jobs in the last year, employing 4,917 of its own citizens. Direct wind employment in the state has reached over 3,000, and 1,862 Minnesotans work in energy storage.

While the numbers don’t lie, there are misconceptions about what “clean energy jobs” are. These professions aren’t limited to project developers, installers and technicians. Minnesota’s growing renewable economy is actually considerably diverse. Clean energy jobs include engineers, lawyers and financial analysts, as well as utility, construction, manufacturing, trade, professional service and other service jobs. Construction and professional services make up 59.2 percent (ranking second behind North Dakota) and 11.3 percent of clean energy jobs in Minnesota, respectively.

Corporate America has finally begun to realize the environmental and economic benefits of renewable energy, and local companies have made significant strides in recent years to contribute to the growth in clean energy jobs. Xcel Energy has been very vocal about its commitment to renewable energy, and continues to be an active and key component to the carbon-free mission. Mortenson Construction in Minneapolis and Ulteig Engineers, an engineering firm with offices in St. Paul and Detroit Lakes added 1,600 staff members in the last five years. Over 180 companies support over 8,700 Minnesota energy jobs. As prices decline and consumer demand goes up, renewable energy businesses and jobs are certain to build upon these foundations.

While clean energy jobs populate much of the urban areas of the state – most notably in Hennepin, Ramsey and Anoka counties – renewable energy still provided over $12.7 million to rural Minnesota counties through a wind energy production tax. As America’s energy sector transitions to a clean energy economy, states across the nation are preparing for a future with huge growth in clean jobs. Minnesota employers are especially anticipating this next chapter. In the next year alone, Minnesotans could expect a 7.3 percent growth rate, with more than 4,400 jobs. In 2018, Minneapolis-based McKnight Foundation conducted a study that found the wind and solar industries in the state could create an additional 44,000 jobs by 2050.