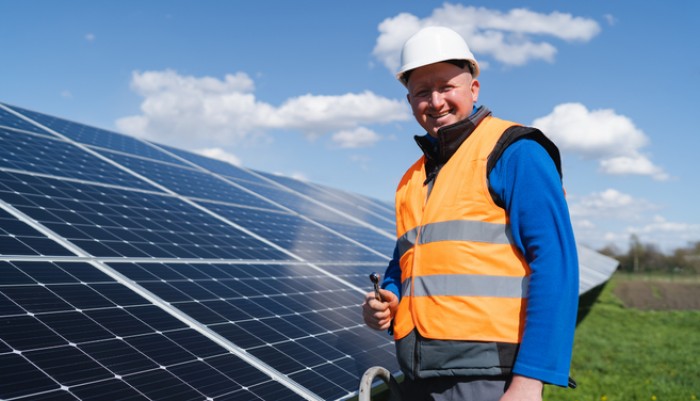 CGA's Vice President of Advocacy, Jeff Danielson, is among the veterans working in clean energy industry. As a former E-5, Second Class Petty Officer, EW(2)SW in the U.S. Navy, Jeff is uniquely equipped to speak on the subject. He told the American Clean Power Association (ACPA), "If your resume wears combat boots, there is place for you in clean energy. The skills of being able to solve problems in the field, taking the initiative and paying attention to detail, are all valuable in clean energy."

Veterans are hired at a higher rate in the energy sector because the skills and knowledge they learn while serving in the military are directly transferrable to clean energy jobs. Teamwork, dedication, work ethic, technical knowledge, and leadership skills, are a few of the valuable skills they bring to the job. These knowledge, skills and abilities are applicable in every sector of the clean energy industry.

In the wind industry, veterans make up 9 percent of the workforce and are hired at a rate 50 percent higher than the national average. As the wind industry continues to grow, so will the number of veterans working in it. According to the U.S. Bureau of Labor Statistics, wind turbine service technician is the second fastest growing job in America. The position is expected to grow 44 percent by 2031, from just over 11,000 jobs to 15,000 jobs.

With over 10,000 veterans currently working in the wind industry, it is clear that the sector is a place where they can thrive. The United States Army supports this career path by offering a course to train veterans and transitioning soldiers to work in the wind industry and other alternative energy industries. The course is called Renewable Energy and Communications Tower Technician Program. The program is offered in partnership with Airstreams Renewables Inc. and is located at Fort Benning, Georgia. According to the U.S. Army, the course is part of The Fort Benning Career Skills Program (CSP) that "offers vocational and technical training programs that focus on the practical application of learned skills and can lead to competitive employment in a specific career or technical trade."

The solar industry also has programs in place to prepare veterans for jobs in the solar industry. The Solar Ready Vets Network is a set of programs funded by the Department of Energy Solar Energy Technologies Office. Programs such as the Solar Ready Vets Fellowship Program, Solar Opportunities and Readiness (SOAR) Initiative, and Cyberguardians and STEM Warriors project connect veterans and transitioning soldiers with career training, professional development, and employment opportunities.

There are currently over 27,000 veterans working in the solar industry, making up 8 percent of the workforce. They are hired at a rate 33 percent higher than the national average. According to the U.S. Bureau of Labor Statistics, solar photovoltaic installer is the eighteenth fastest growing job in America. The position is expected to grow 27 percent by 2031, with roughly 2,500 openings per year.

The transmission, distribution, and storage industries employ over 80,000 veterans, which makes up 7 percent of the workforce. The Veterans Advanced Energy Project (VAEP) elevates the voices of veterans and assists in getting them introduced to the clean energy industry. VAEP's mission is "inspiring military veterans to seek meaningful and sustainable employment by educating them on the importance of clean energy to US national security." The founder of the project, Dan Misch, found that tying clean energy to national security helps veterans find meaningful employment once exiting the military. Read more about renewables and national security in our recent blog, "It's a Fact: Renewables Promote Energy Independence and Enhance National Security."

Steady growth of the clean energy industry will lead to more and more opportunities for veterans in the workforce. In a salute to all of America's veterans this November, American Clean Power Association spoke with a number of veterans working in the industry. See what they said about the connection between their military service and their careers in renewable energy. Or read a few statements from veterans working for CGA Member companies below.

Karl J. DeLooff, current Director of Quality, Safety, Enviro3nment and Sustainability and former Corporal for the U.S. Marine Corps and Lieutenant for the U.S. Coast Guard said, "Veterans have skills and cultural backgrounds that can dramatically advance a company's mission. They are often the most trainable, coachable, and capable people you will have in your organization."

Steven Homerstad, current Lead Generation Dispatcher and former Prototype Instructor, Electrician's Mate Nuclear First Class, E-6 in the U.S. Navy said, "By serving in the military, I learned how to thrive in a fast-paced, quickly evolving and expanding field of clean energy. Adherence to procedures and processes that are safety-oriented were already second nature."

Jeff Hill, current Regional Operations Manager and former AO3 in the U.S. Navy said, "The Navy gave the foundation of my leadership philosophy that has served me well in being able to develop many people into top performers and true assets."

Jennifer Sandoval, current Executive Assistant and former Gunnery Sergeant, E-7 in the U.S. Marine Corps said, "For me, being of service to our nation has always been a personal goal... I now work for a company that is not just about the nation but is making global impacts."

David Hardy, current EVP and CEO and former Officer Candidate, E-5 for the U.S. Navy said, "I learned key leadership skills while serving in the Navy – how to work as team, doing all you can to get the job done, and never giving up. Each were needed every day to be successful. Today, I am leading a geographically diverse team to advance clean energy technologies and solutions for the U.S. These same skills help me on a daily basis."

Jake Jablonski, current Asset Manager, Renewable Asset Management and former Munitions and Missile Maintenace Officer, Captain in the U.S. Airforce said, "I like working in the clean energy industry because I feel like I am continuing to serve my country in new ways: I am contributing to energy security through expansion and diversification of our energy matrix, and I am helping to slowly reduce our carbon footprint."

Timothy Marvich, current Vice President of Distributed Energy Resources and former captain for the U.S. Army said, "Hiring veterans can infuse your team with that selflessness and passion, along with adding team players with proven values, skills, and real-world experience."