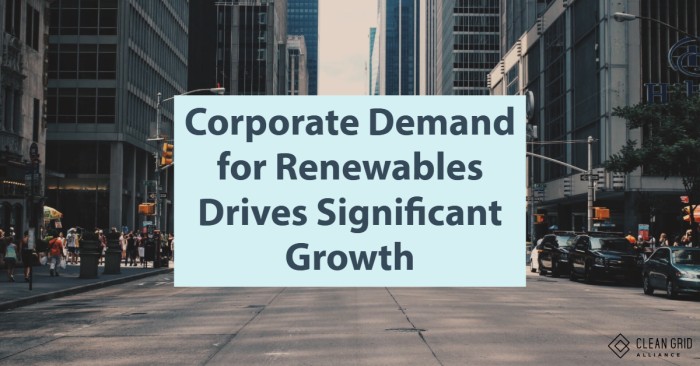 Corporate America is helping drive the evolution of the nation’s energy system toward more renewable energy like wind and solar. Power Purchase Agreements (PPAs) have enabled eco-conscious corporations to buy into low-cost energy sources. Companies such as AT&T, Walmart and Facebook, who see this as both an economic and moral asset, have become leaders in the pledge to garner their energy from renewable sources. This commercial and industrial (C&I) purchasing is transforming the energy economy, and it’s just getting started.

According to Bloomberg New Energy Finance’s 2019 Sustainable Energy in America Fact Book, the value per unit of energy has increased by 14% since 2009, which makes renewable energy a great asset for companies. The renewable research facility’s updated report also states that in the last year, the U.S. economy expanded at its fastest pace in five years. In 2018, about 3% of all electricity sales in the U.S. (134 million megawatt hours (MWh)) of wind and solar-powered electricity were purchased above state-level mandates. This is important because it suggests that while state policies, like renewable portfolio standards, have been extremely important in advancing the use of renewable energy, now, economics are driving the growth. Large organizations are compelled to invest in renewable energy largely for reasons related to branding, pressure from investors, peer pressure, and reducing business risks. Fortunately, economics are enabling companies to meet their corporate sustainability goals and the demands of their customers to reduce their carbon footprint without breaking the bank.

As more companies make pledges to reduce their carbon footprint, more wind and solar projects appear throughout the U.S. According to AWEA, contracts with C&I purchasers and hedge agreements made up 48% of offtake arrangements for projects commissioned in 2018, at a record-setting 4,203 MW. Thirty-seven corporate buyers signed wind energy contracts last year, including 21 first-time buyers. The trend is continuing in 2019. Although utilities own 75 percent of wind capacity commissioned in the first half of 2019, 62 percent of PPAs have been contracted to corporate customers with 52 percent of corporate PPAs coming in the second quarter. In fact, several companies signed wind contracts for the first time in the second quarter, including Hormel foods, Smithfield Foods, Crown Holdings, and Ernst & Young.

Twenty-five states now host corporate renewable energy projects for industries spanning the technology, telecommunications, consumer staples, financial, materials and industrials spaces. These companies, including such titans as Amazon and General Motors, are focused on the cost-competitiveness of wind energy. They are attracted by the ability to lock-in low electricity prices for 20 – 30 years while promoting sustainable business practices and environmental stewardship. Some companies even make business decisions for siting new data center locations and other facilities based on where wind projects are located. 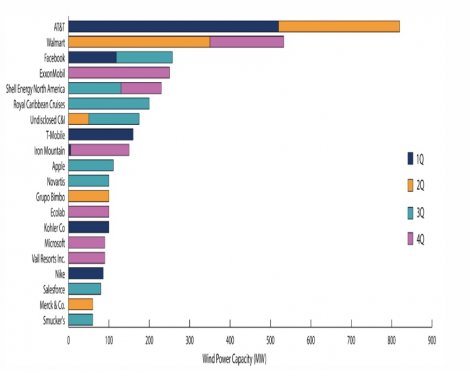 Currently, at least 5,250 MW of wind projects under construction or in advanced stages of development are contracted to a C&I customer. The Midwestern states have the most upside potential, with numerous carbon reduction policies accelerating coal retirements throughout the region and ample wind resources to harvest. In fact, the Midcontinent Independent System Operator (MISO) has 858 MW of wind for C&I customers in development in 2019, and another 520 MW in the pipeline for 2020.

A recent report by Wood Mackenzie, states that C&I customers claim 9 percent of the total installed wind power in the United States, and in 2018, C&I buyers represented approximately 20 percent of the wind market. The report also suggests that up to 85 gigawatts (GW) of renewable energy demand exists within the United States’ largest companies through 2030. Solar has been of particular interest as an energy source, largely driven by the dramatic 88 percent cost decrease since 2009. The report states that solar has an anticipated demand peak of 12,547 MW by 2027.

Wind and solar have developed into full-fledged industries that produce about 8.2% of the country’s electricity today, and C&I purchasing is helping drive the resulting economic development and carbon reduction.

The demand for renewable energy from C&I customers is at an all-time high and will only increase over time. Clean Grid Alliance is actively facilitating conversations with decision-makers at the state and local levels, and at MISO, about the strong desire to transform our energy sector with cleaner, renewable energy sources. Transmission constraints in MISO, and in the Upper Midwest in particular, will continue to be the major barrier to fulfilling C&I customer demands for low cost renewable energy. We expect C&I voices, along with others, will help spur action for additional transmission to deliver renewables and accelerate the energy transition.