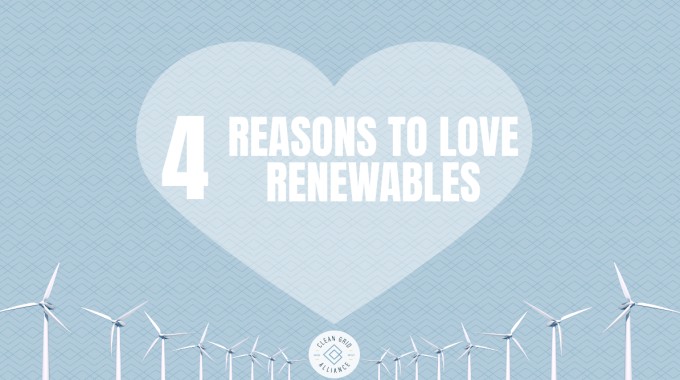 Renewable energy is on the rise. As a homegrown, reliable energy source, wind and solar have become billion-dollar investments that have created jobs, provided incomes for families and benefitted America’s heartland. As the call for carbon-reduction sounds, the energy market has never been stronger.

Love is in the air this month, and there’s plenty to love about clean energy. Here are just four reasons why we love renewables.

In the Midwest, wind and solar provide the most clean energy jobs, employing over 70,000 people in stable careers paying a livable wage. Typical clean energy jobs include developers, installers and technicians. In 2018, the average pay for wind turbine technicians was $54,370/year ($26.14/hour), while the average pay for solar installers was $42,680/year ($20.52/hour)

Clean energy jobs also include engineers, lawyers, financial analysts and many more! America’s veterans have a large footprint in clean energy jobs. Throughout their service, veterans learn trade and professional skills that they can apply outside their units, making them a great fit for these jobs. The wind industry proudly hires veterans 67 percent more than any other industry.

The demand for renewable energy also creates opportunity on the supply chain, such transportation and shipping as well as the nation’s 500 manufacturing facilities. When a project gets the greenlight, construction jobs boom. After the project is built, full-time positions such as site management and office staff become a necessity.

Farmers are one of the biggest financial beneficiaries of renewable energy. After years of harvesting crops, farmers are now adding wind and solar. Farmers that host turbines on their property are compensated with land-lease payments. These fixed-term leases provide a stable, guaranteed annual income. Approximately $289 million in annual income was paid to U.S. farmers and rural landowners in 2018.

Contrary to popular myths, renewable energy is reliable and resilient. The U.S. electric grid is the largest interconnected machine on Earth and was named the “supreme engineering achievement of the 20th century” by the National Academy of Engineers.

Grid operators continue to integrate large amounts of wind energy into the electric grid. Wind reliably powers more than 20 percent of a number of Midwestern states, such as Iowa and North and South Dakota. Thanks to the nation’s network of transmission lines and integrated regional electric system, operators are equipped with resources from across their footprint to meet energy demand.

Advancements in technology allows for modern wind energy plants to provide the same grid reliability that would come from a traditional power plant. Adding solar to  the mix is a great compliment to wind energy.

Farmers who host wind turbines or solar installations benefit from fixed-terms leases, which helps them make ends meet in wet and dry years, through unexpected frosts or hailstorm damage, through times of low commodity prices or lower yields. Farmers who harvest the wind or sun can have a guaranteed yield with stable revenue.

The majority of all wind and solar projects are located in rural areas, and clean energy allows farmers to export products on their land sustainably. Wind turbines need only half an acre of land for towers and access roads, leaving plenty of room for other crops and livestock. Many farmers have come to appreciate the access roads during harvest time. As wind and solar have become new cash crops for farmers, the broader communities surrounding them have enjoyed the consistent benefits that come with this new source of property tax revenue.

Wind farms provide new tax revenue for the county and township, which is often used to improve roads, bridges and reduce taxes for the community. Not only does this help the whole community, but it also helps farmers ensure they can continue operating heavy machinery on roads and bridges around their farm.

According to AWEA’s 2018 Annual Market Report, The U.S. wind industry has brought in over $142 billion in capital investment to rural America and over $1 billion in state and local taxes and lease payments to private landowners.

The demand for wind and solar energy is here, and their capacity to meet our energy needs and reduce carbon emissions is growing. Last year was the third strongest year for wind energy additions, and the potential for solar energy growth is rising rapidly. Wind and solar provide a source of income, and deliver low-cost and reliable energy. It’s no wonder that society is shifting its gears toward- clean energy. Renewable energy is just smart, and that’s why we love it.