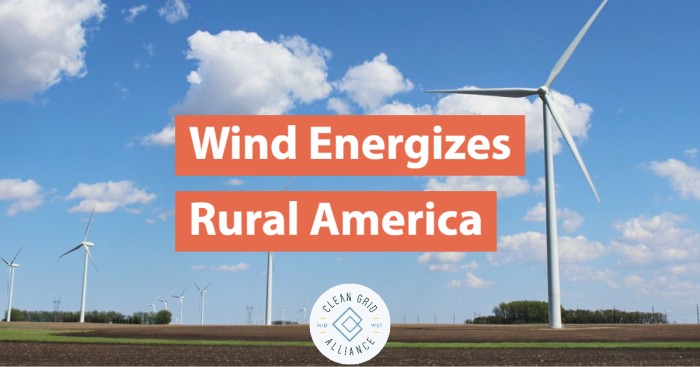 No matter what time of year it is, rural communities continue to thrive thanks to renewable energy. As a cash crop that brings a flow of benefits to the landowners and rural communities alike, wind energy has helped revitalize agriculture, schools and small businesses across the Midwest. By the end of the decade, the U.S. wind industry was bringing annual earnings of $1.6 billion to America’s heartland, giving communities plenty to be excited about.

Usually, the word “tax” makes us roll our eyes. But that’s certainly not the case in the wind industry. In 2018, a report by Moody’s Investors Service stated that wind farms have improved finances in more than 400 counties in 41 states nationwide. The American Wind Energy Association reports that wind power supplied $912 million in state and local taxes in 2019, a 68 percent increase from 2018.

Wind Energy Production Taxes are one way communities can benefit from a wind farm. Minnesota’s model of taxation is based on the production capacity of each wind farm. The revenue generated from this tax is collected by the state then all or a percentage is given back to host communities. Eighty percent of the Wind Energy Tax revenue goes to the county and 20 percent goes to the cities or towns that host wind farms. Counties and towns then have the ability to choose how they use this money. The revenue from wind projects has been a great resource for local communities in need of assets to fill budget gaps.

Mower County, Minnesota, has been utilizing its revenue for improving roads, as well as building renovations and the local fairgrounds. Ranking number one in the state for wind energy production, the county has received over $19 million from wind tax revenue since 2004. In 2019, Mower County wind energy generated $2 million of tax revenue. The remainder was put into a general fund that is used to reduce the county tax levy. In 2019, wind energy lowered Mower County’s tax levy by 2.85 percent!

Schools in Minnesota are also one of the greatest beneficiaries of wind energy tax revenue. The extra income from wind projects allows educators to invest in the futures of their students. Many school districts put money into areas that were never an option before, such as buying new computers, updating their athletic facilities or offering college-level courses.

Landowners continue to reap the benefits of homegrown renewable energy. It takes less than one acre to host a wind project, leaving room for farmers to produce a variety of goods and continue other operations. However, wind energy offers a one-of-a-kind monetary opportunity to landowners that they wouldn’t find anywhere else. Through landowner lease payments, owners are compensated for leasing their land for wind projects for the entirety of a turbine’s lifespan. This not only helps farmers provide a stable income for their families, but it also gives them the chance to make improvements to their homes, outbuildings, drainage and irrigation systems, as well as invest in new equipment. Landowners received $706 million in lease payments in 2019 alone.

Jobs are perhaps the most important economic asset in the country, and wind energy has provided a new land of opportunity in rural areas. Over 99 percent of operating wind capacity is located outside city limits, and these projects need all-hands-on-deck to get them up and running. According to AWEA, wind energy has created more than 70,000 jobs since 2013. Today, wind directly employs over 120,000 workers in all 50 states. In fact, wind turbine technician is the second-fastest growing job in the country. In 2018, the average pay for wind turbine technicians was more than $54,000/year. Other direct wind jobs can be found in fields such as engineering, finance, and construction. The demand for wind power also creates opportunities in the supply chain, such as transportation and shipping. The nation’s manufacturing facilities support 22 percent of the industry’s workforce, with over 26,000 workers. After the project is built, full-time positions in management and office staff are also needed to keep things running smoothly.

In the last 10 years, wind energy has powered more than 32 million homes. From job opportunities and revenue to keeping the family farm afloat, wind has brought new life into the rural communities that host them. With a projected 44 gigawatts (GW) in the pipeline for 2020, wind will power another 15 million homes, energize the country’s workforce and create more financial stability in rural areas – and that’s just smart!