Renewable Energy Cleans Up the Environment 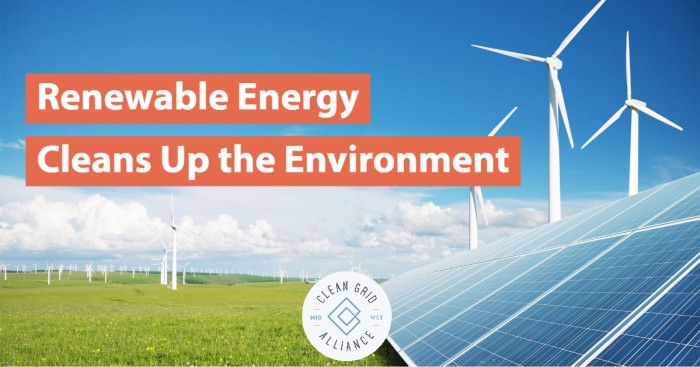 April 22 is Earth Day. That makes it a great time to take stock of the many benefits renewable energy offers the natural world 24/7/365.

One of the greatest environmental benefits renewable energy delivers is pollution reduction. More than a third of U.S. greenhouse gas emissions come from burning fossil fuels used in electricity generation. According to the American Wind Energy Associations 2019 Annual Report, the Midwest and Mountain West regions of the country are the most emissions-intensive regions resulting from the large share of electricity generation from coal plants.  The Plains has seen the largest reduction in emission intensity from electricity generation over the last 10 years thanks at least in part to the growth of wind power capacity in the region. According to a recent report by the Business Council for Sustainable Energy, America’s power sector had the largest drop in greenhouse gas emissions, with a 7.8 percent decrease last year from 2018. Overall emissions have fallen 4.1 percent from a decade ago, and 12 percent below 2005 levels. In the last 10 years, emissions declined nearly 25 percent.

Wind energy is now the number one renewable energy source, providing 7 percent of the nation’s electricity needs. Last year, wind energy avoided 198 million metric tons of carbon dioxide. That’s the equivalent of taking 42 million cars off the road. This is beneficial for the environment, as well as our well-being.

Solar energy has been on the rise in recent years as well, now providing an astounding 77 gigawatts (GW) of carbon-free electricity. According to the Solar Energy Industries Association (SEIA,) solar energy saves as much carbon as 1.5 billion trees. More than 14.5 million homes derive their electricity from solar, which has offset more than 88 million metric tons of carbon dioxide emissions. As the demand grows and installation and operation costs continue to decline, solar will bring even more clean energy to Americans.

Renewable energy resources, like wind and solar, also reduce sulfur dioxide, nitrogen oxide and fine particulate matter, which can cause health problems. According to the Center for Disease Control and Prevention, about 25 million people suffer from asthma. About 7.5 percent of the national average include our nation’s children. In 2019, wind energy avoided 400,000 metric tons of pollutant emissions that trigger asthma attacks.

But that’s not all! Renewable energy also reduces water consumption. Fossil fuel power plants rely on water for generation and cooling, making the U.S. power sector the highest water consumer. Thankfully, wind turbines don’t need water to keep them spinning. Because of this, wind power saved 103 billion gallons of water in 2019 alone. That’s the equivalent of approximately 312 gallons for each person in the country, or 776 billion bottles of water saved.  Solar projects also use significantly less water than traditional power plants thanks to water use management programs.

The United States has been undergoing a transition to clean energy, and the last decade has shown substantial growth in the amount of renewables powering our economy. In the last 10 years, renewable energy capacity has doubled currently accounting for 18 percent of the nation’s electricity. Wind currently keeps the lights on in 32 million homes, and solar generates enough electricity to power another 14.5 million. Wind energy costs have declined 70 percent in the last decade, and solar energy costs have fallen 88 percent since 2009. Technology improvements and low installation and operation costs will open more doors (and homes) to renewable energy.

Spring is a season of renewal. Trees and flowers come to life, the days grow brighter and warmer, and many of us begin to think about growth and change – what we can do to improve the world in which we live. The renewable energy industry has come a long way, bringing with it an abundance of environmental benefits that have greatly impacted our lives. And there’s more to look forward to.

Solar capacity is projected to hit 100 GW by 2021. There are 44 GW of wind power in the pipeline for 2020, which would power an additional 15 million homes and put a stop to harmful pollutants.

As the demand for clean energy grows, the future looks bright and the air smells clean.