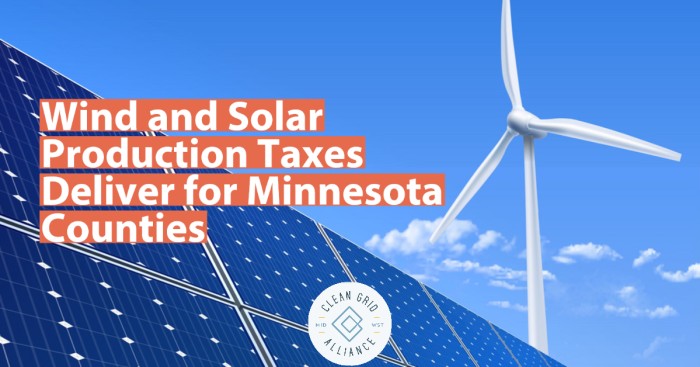 Minnesota is a national leader in the transition from fossil fuels to clean energy. Renewables provide 25 percent of Minnesota’s in-state electricity, about 10 percent above the national average. Minnesota is also home to the Midwest’s largest Solar + Storage project, located in Ramsey and Athens Township. In addition to providing clean energy and reducing carbon emissions, renewables, like wind and solar, have provided economic stability to Minnesota’s counties throughout the years.

Wind energy benefits 31 percent of Minnesota’s counties. As the number one producer of wind energy in the state, Mower County received over $2.1 million in production taxes this year. The county has been benefitting from the Wind Energy Production Tax since 2004. In 2019, the county used this revenue for improving roads, as well as building renovations and updating the local fairgrounds. The remainder was put into a general fund that was used to reduce the tax levy. This revenue lowered Mower County’s tax levy by 2.85 percent in 2019.

There’s no doubt renewable energy has created great economic opportunities in Minnesota’s rural communities. It takes less than one acre to host a wind turbine, leaving plenty of room for farmers to use their land as they see fit. Landowners may lease their land for wind projects for the entirety of a turbine’s lifespan, providing a new cash crop through the annual lease payments. In 2019, Minnesota landowners that host wind projects received $26 million in annual lease payments. This not only helps farmers provide a stable income for their families, but it also gives them the freedom to use those dollars as they choose. Many landowners invest in their homes, outbuildings, drainage and irrigation systems, new equipment, or even college tuition. In 2019, $706 million in lease payments was paid to landowners all across the U.S.

Wind and solar are more than just clean, reliable energy sources. They’re economic drivers for smaller communities, many of which must stretch their budgets. Thanks to wind and solar, farmers can keep their land in the family and counties can afford to provide citizens with the services and resources they need. More than $912 million in state and local taxes was paid for by wind energy, and an additional 14 million homes are projected to be powered by wind in the next year. Over 700 MW of Minnesota solar is expected to hit the grid in the next five years.