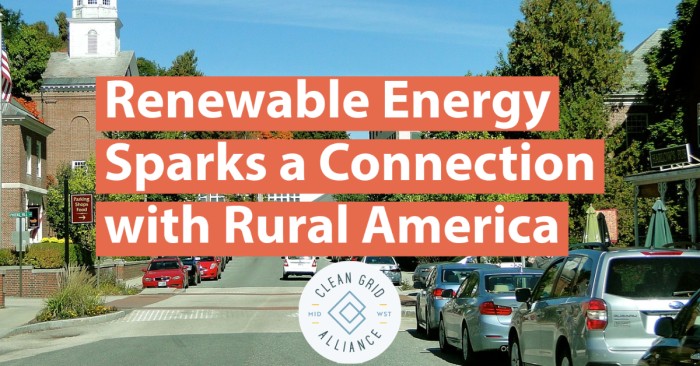 As the transition to renewable energy grows, rural communities have become one of the greatest benefactors of clean power. Now that wind and solar are the cheapest new sources of generation on the market, the relationship between rural America and advocates for renewable energy is getting stronger.

Small towns are often looking to bring greater opportunities to their communities. Luckily, renewable energy offers unique opportunities in a lively industry where there's always work to be done. By the end of 2020, solar employed 317,000 Americans across the country, wind employed 117,000 and storage employed 67,000. In the Midwest, one in five clean energy jobs (143,800) are located in rural areas. That's because 99 percent of all wind projects are located in the wide, open spaces offered by the region.

You know the term, "it takes a village"? The same can be said about getting a project up and running. Once a turbine or solar panel gets the green light, this creates hundreds of new jobs across a multitude of industries to build it from the ground up. Best of all, wind technicians and solar installers are the second and fifth-fastest growing jobs in the country, respectively.

Although 131,000 clean energy jobs were lost to the COVID-19 pandemic, these jobs are a key component to economic recovery. According to a report from the Rocky Mountain Institute, about 54 GW of wind and solar projects are slated to come online in 2030 and will employ 40,000 workers during the construction phase, and deliver $2.3 billion in annual wages. That also means $3.7 billion in annual wages for 38,000 workers in operations and maintenance (O&M) positions that support new and existing wind and solar capacity.

With intensifying weather conditions, seasonal changes and fluctuating commodity prices, farmers can face difficulty in planning the future of their operations. A stable paycheck, in the form of a land lease agreement from an energy company could be just the thing they need to get them through the hard times. Only one acre or less of land is needed for a wind turbine, including access roads. Solar projects use only seven to ten acres of land per megawatt, which can be restored to its original use following the term of the lease, if desired. Rural areas are the perfect location for renewable energy development; and who would be better to host them than those who work the land every day?

These property owners receive an annual land lease payment as compensation for leasing their land for the entirety of a project's lifespan. Wind developers work alongside farmers to make sure turbines are properly located and that access roads to the turbines are constructed in a way that can also benefit the farmer. In turn, the farmer is paid by the developer. This allows farmers who have embraced wind and solar energy to receive an extra source of income while enabling them to continue producing commodities from their land. This additional revenue offers stability to an otherwise unpredictable income for their families. And, many farmers and landowners use the additional income to make improvements to their homes, outbuildings, drainage and irrigation systems, as well as invest in new equipment. All this further drives economic development for the entire community.

According to the American Clean Power Associations 2021 Annual Report, in 2021, landowners received $1.3 billion in lease payments, and these numbers are increasing as more development is in the works.

The amount of workers flocking to rural communities for renewable energy development, temporarily and permanently, is great news for their economies. Communities begin to see a ripple effect that otherwise would not have been possible. Local businesses, such as hotels, gas stations and restaurants see extra cash flowing into their businesses from construction workers looking for accommodations and frequenting their establishments. Building and construction supply companies also benefit from this development. When the project is complete, wind and solar projects become a new town employer, creating full-time jobs for technicians, site managers and office staff. These full-time employees move into the community, eat at local restaurants, purchase real estate, shop at the grocery store and enroll their children in the public schools, all of which further supports the local economy.

TPI Composites and Arcosa have been lifesavers for the community. Their jobs are the highest paying in the community right now. They’re very competitive, with great benefits, and are attracting workers from many surrounding communities that now come to Newton for work. – Frank Liebl, Newton Development Corporation Executive Director, Seeds of Opportunity: How Rural America is Reaping Economic Development Benefits from the Growth of Renewables, Rocky Mountain Institute, 2021

A recent case study by the Rocky Mountain Institute determined that wind turbine manufacturing played a key role in the economic rebound of Newton, Iowa, after its chief employer left the community. Within a year, two wind component manufacturers, TPI Composites and Acrosa, established operations in Newton. Both companies took off and brought life back into the community. Now employing over 1,250 people, unemployment in the county fell from a high of nearly 10 percent in 2009 to 2.4% percent today. These developments have stimulated a substantial amount of new jobs for residents. These jobs pay above the county average, attracting workers from 68 outside communities to work in Newton. In addition, 15 companies established new facilities in the county.

Chisago County, Minnesota is not only the top producer of solar energy in the state – it's also home to the largest solar facility in the Midwest. And that's not counting the additional 1,000 solar panels on the roofs of the five schools in the local district, which are used to save money on electricity costs. Thanks to solar, the Chisago Lakes School District expects to save $3 million in electricity costs over the next 30 years.

In 2020, White County, Indiana, received $300,000 from the Meadow Lake wind farm and EDP Renewables. Four towns received $75,000 each, which they used for projects such as a new fire station, signage, a splash pad and repairs to the American Legion building.

In 2022, Cloud County, Kansas, is expected to receive their annual $300,000 gift payment from Meridian Way Wind Farm and EDP Renewables. These payments are intended to be used to improve the quality of life, prosperity and safety of Cloud County Residents. Additionally, the payments are used to create additional recreational, social, health, educational, economic, and community development opportunities for citizens. This year specifically, Cloud County is requesting to use the funds for improvements and repairs to mental health services, fire departments, park improvements, historical museums, churches, senior centers, and much more.

Renewable energy has been delivering billions of dollars for the nation's heartland, while providing low-cost, clean energy for America. Growth in the next decade is expected to be monumental. The U.S. is on track to be 90 percent carbon-free by 2035, with an expected 750 GW of installed wind and solar capacity that could deliver nearly $11 billion per year in direct benefits to rural communities hosting these projects. About 600 GW of new systems installed between 2020 and 2030 will generate $220 billion in benefits. This translates to $39 billion in state and local tax payments, $2.7 billion of which would pay local taxes alone.

Renewables first. It's the smart thing to do!