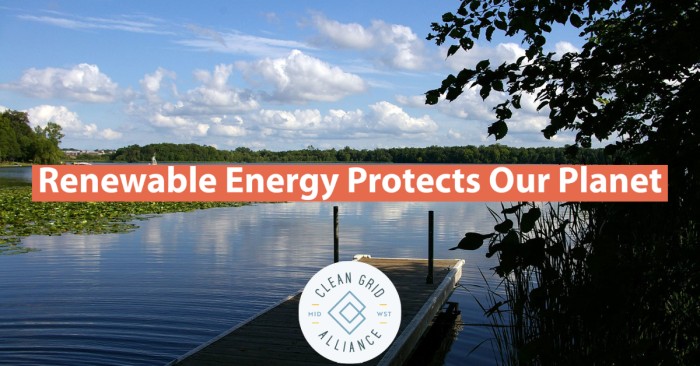 Happy Earth Day! It’s that time of year when we like to acknowledge the many benefits renewable energy provides for our planet.

As America transitions away from fossil fuels, the clean energy sector has taken on the task of keeping the lights on while providing reliable, low-cost electricity that leaves no carbon footprint. Renewables now produce about 20 percent of the nation’s electricity. Clean air and water, and decreased greenhouse gas emissions means a higher quality of life for Americans.

The first thing that comes to mind when it comes to renewables and the environment is pollution reduction. Did you know more than a third of U.S. greenhouse gas emissions come from burning fossil fuels? In fact, according to the American Clean Power Association, the Midwest and Mountain West are the most emissions-intensive regions of the country resulting from the large share of electricity generation from coal plants. Thankfully, the region is seeing the effects clean energy has to offer. Clean energy protected the U.S. from 244,964,000 metric tons of CO2 emissions from fossil fuel power plants. That’s the equivalent of taking 52,120,000 cars off the road! The Business Council for Sustainable Energy’s latest report says U.S. power generation carbon emissions fell 10.9 percent from 2019 – the lowest they’ve been in 30 years. 2020 saw a 9.2 percent decrease in total emissions, 20 percent below 2005 levels.

Wind energy remains the number one renewable energy source in the country. Over 7.4 percent of the nation’s electricity is powered by the nation’s 126 GW of wind energy. In the last year, wind energy alone avoided 198 million metric tons of CO2 emissions. That translates to 42 million cars off the road!

The U.S. solar sector continues to thrive on the growing demand. U.S. solar capacity is currently at 97.2 gigawatts (GW) of carbon-free electricity, enough to serve over 17.7 million homes. According to the Solar Energy Industries Association (SEIA,) solar energy saves as much carbon as 2 billion trees, and has offset more than 110 million metric tons of carbon dioxide emissions. As installation and operation costs continue to decline, even more American homes and businesses will be powered by solar.

Renewable energy resources also reduce other harmful elements that cause health problems, such as sulfur dioxide, nitrogen oxide and fine particulate matter. According to the Center for Disease Control and Prevention, about 25 million people suffer from asthma. In 2019, wind energy alone avoided 400,000 metric tons of pollutant emissions that trigger asthma attacks. Air pollution has also been linked to heart disease, birth defects and neurocognitive disorders, such as Alzheimer’s. A 2019 study determined wind and solar lead to improved regional health conditions. In fact, the most savings in health benefits per megawatt-hour came the Upper Midwest and the Great Lakes regions thanks to wind and solar.

Because fossil fuel power plants rely on water for generation and cooling, the U.S. power sector consumes the highest amount of water. Alternatively, renewable energy reduces water consumption. Wind turbines don’t need water to keep them spinning, and solar projects have water use management programs to ensure they use significantly less water than traditional power plants. In 2019, wind power saved 103 billion gallons of water, the equivalent of 312 gallons for each person in the country or 776 billion bottles of water saved. Solar is the least water-wasteful of all renewable energy resources, at zero gallons of water per megawatt-hour.

As we enjoy the onset of spring, it’s nice to know that clean energy demand is growing, and that it is delivering a bright future to the economy and the planet.