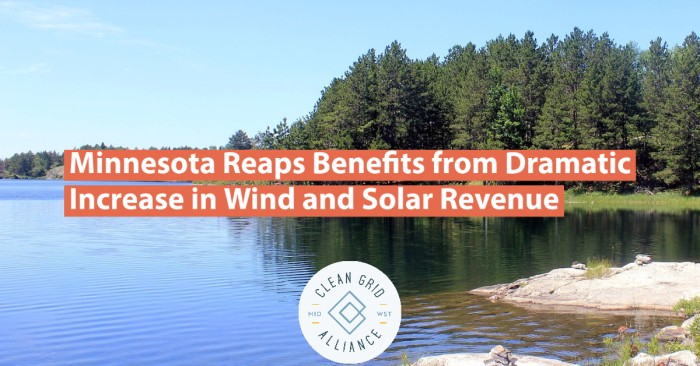 Minnesota’s clean energy leadership continues to grow. Renewables, including wind, solar and storage were Minnesota’s largest power provider in 2020, delivering 29 percent of the state’s electricity. In addition to reducing carbon emissions, wind and solar energy have provided economic stability for Minnesotans in all corners of the state. For nearly two decades, counties and landowners have benefitted from the wind and solar production tax revenue coming from the renewable energy industry.

Wind energy has been delivering benefits for Minnesotans since 2004. Today, 32 percent of Minnesota’s counties benefit from homegrown wind energy. Together, Minnesota counties generated over $14 million in wind energy production tax revenue in 2020, a 9.1 percent increase from 2019. Lincoln County now ranks first in the state as the county that will receive the largest amount of revenue coming from wind, surpassing Mower County. This year, Lincoln County will receive over $2.5 million, compared to $1.8 million in 2020, a 37 percent increase. Mower County ranks second in the state with $2.097 million in wind production tax revenue. Jackson County rounds out the top three with $1.8 million. Since 2004, wind energy production tax has generated over $133 million in revenue for Minnesota counties. This revenue has been very helpful for counties in need of funds to improve infrastructure, schools and public buildings and help keep property taxes down for all residents. 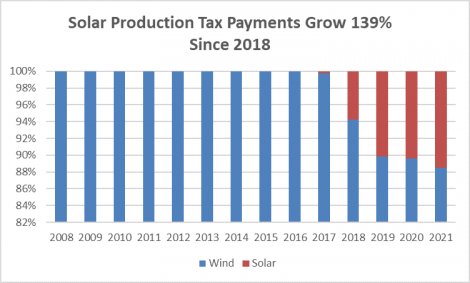 Solar energy also has grown significantly in the state. In fact, Minnesota is home to the Midwest’s largest Solar + Storage, located in Ramsey and Athens Township. "We're on an exponential growth curve in the state and really, it's behind more utility-scale and community solar-scale projects,” says IPS Solar chief development officer Eric Pasi. Minnesota now ranks 15th in the nation for solar energy capacity, with over 1,500 MW powering more than 200,000 homes. Production tax payments to counties hosting solar projects has increased 31 percent since 2019, and 139 percent since 2018. Minnesota now has 38 counties that have solar installments that received over 1.8 million in production tax revenue. Chisago County continues to produce the most solar energy in the state, receiving over $350,000 in production tax revenue.

These projects translate into real dollars and make a real positive impact on small communities that might otherwise struggle to pay for investments into their communities without overtaxing their residents. More opportunities for communities to benefit from the growth of solar energy is on the way. - Clean Grid Alliance Executive Director Beth Soholt

There are 2,836 megawatts of solar being planned in Minnesota; and Xcel Energy recently announced a proposal to build a 460 megawatt solar project in Becker, which is slated to become the state’s largest solar project.

It takes less than one acre to host a wind turbine, and between seven and ten acres per megawatt of solar. That creates plenty of economic opportunities for Minnesota’s rural communities. Landowners can lease their land for wind and solar projects, providing a new cash crop through annual lease payments. Many solar developers include pollinator habitats under or near the panels that can help with crop yields. These opportunities not only help farmers provide a stable income for their families, but it can help ensure a property stays in a family that has cultivated the land for generations. This extra income can also help landowners invest in their farms or even help with college tuition for their children or grandchildren. Minnesota landowners received $23.1 million in land lease payments in 2020 alone.

Wind and solar offer more than just clean, reliable energy sources – they bring economic activity that is often needed in smaller communities. Thanks to wind and solar, farmers can continue to work the land and counties can meet resident needs with a new source of revenue. Currently, $848.7 billion are being paid to U.S. landowners leasing wind and solar projects on their land. Nationally, property, state and local tax payments from renewable energy projects totaled $1.7 billion in 2020. But it doesn’t end there.

Last spring, energy cooperative Great River Energy announced new renewable energy goals, including a plan to install 1.1GW of wind and retire a 1.5GW coal facility by the end of 2022. Cargill has also publicly committed to reducing emissions. The Minnesota-based company is aiming to reduce emissions caused directly and indirectly by their operations by 10 percent by 2025 from 2017 levels, and emissions produced from their supply chain by 30 percent per ton of product by 2030. Minnesotans can also look forward to over 1,000 MW of new solar in the next five years.

As Minnesota puts renewables first, all corners of the state see the benefits – and that’s just smart.