Solar Energy Lights Up the Midwest 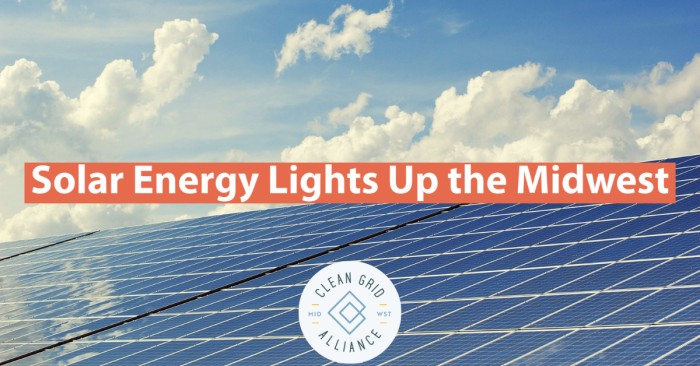 The country is running more and more on renewables – and solar energy is rising to the top. Despite the COVID-19 pandemic, renewable energy demand never fell. In fact, 2020 saw the highest number of installations ever! That’s lead to 103 gigawatts (GW) of operating solar powering 18.6 million American homes across the country, and there’s much more in store. The Energy Information Association predicts 15.4 GW of new utility-scale solar capacity this year.

Here in the Midwest, over the last few years, the Midcontinent Independent System Operator (MISO) interconnection queue has changed from mostly wind projects to more solar being planned. In fact, 51.5 GW of solar power are in the MISO queue, ready to keep the lights on in homes across the nation.

In addition to its benefits as a clean, renewable energy resource, solar is becoming an instrumental economic driver. About 231,000 Americans are employed in the solar industry nationwide in family-supporting, stable jobs. That’s four times the amount of people working in the coal industry. Solar is the largest employer in the renewable energy industry, too. Solar installer is the fastest-growing job in the country. Over 36,000 of these jobs are located in the Midwest according to the 2021 Clean Jobs Midwest report.

It only takes between seven and ten acres per megawatt to host a solar project. Landowners are wisely diversifying their income streams by adding these projects to their portfolios. Solar projects don’t only benefit landowners, however. Production taxes ensure host communities benefit from solar projects, too. In Minnesota, 38 counties received over $1.8 million from solar production tax revenue. That’s 45 percent of the state’s counties! This revenue has been very helpful for counties in need of funds to improve infrastructure, schools and public buildings and help keep property taxes down for all residents. Chisago County, Minn., is the number one recipient of solar production tax revenue, receiving over $350,000 in 2020. That’s partially because Chisago Lakes School District has embraced the power of the sun with 1,000 solar panels on the roofs of the district’s five schools, which saves them $100,000 every year on electricity costs. In the next 30 years, it is estimated the district will save over $3 million thanks to solar.

As one of the cheapest renewable sources, solar is a great asset for utilities. Utility-scale prices are at a record low, with current costs ranging between $16-$35 per megawatt hour. Since 2009, the cost of solar has dropped 90 percent. Investment in the solar industry reached more than $25 billion in 2019. As utilities and states across the region implement robust clean energy and decarbonization plans, they all have one thing in common: embracing large-scale solar.

Wisconsin-based utility Alliant Energy has major plans to increase its renewable energy portfolio with solar by investing $900 million to acquire six projects ranging from 50 megawatts (MW) to 200 MW each. These projects will be developed by NextEra Energy Resources, Ranger Power and Savion. The projects were unanimously approved by the Wisconsin Public Service Commission (PSC) in April 2021. The 675 MW combined capacity of the projects would more than triple the state’s current solar capacity. Spanning across the state, this development would make Alliant the largest provider of solar energy in Wisconsin.

In addition to offering clean, low-cost energy, these projects will greatly benefit local communities. Alliant’s new projects will produce $2.7 million in revenue for host counties and townships. In the next three decades, the revenue to local communities will be over $80 million. Landowners will also receive payments for hosting the solar farms in the form of land lease payments.

In 2019, Alliant launched its carbon-reduction plan, called the “Clean Energy Blueprint”. This outline aims to derive 30 percent of the utility’s electricity from renewables, and to cut carbon emissions by 80 percent by 2030. This announcement includes plans to close its remaining coal plants by the end of 2022, which will save customers “hundreds of millions of dollars in costs.” The blueprint also calls for one gigawatt of solar by 2023.

Other utilities across the Midwest have also been implementing solar in their carbon-reduction plans. In 2020, Minnesota Power announced plans to invest $40 million in three new 20 MW solar projects located in northern Minnesota that would triple the state’s solar capacity. Construction is expected to begin in 2021, and the utility hopes for full operation by 2022. Xcel Energy signed contracts for large-scale wind, solar and storage projects in order to retire their coal plants in Minnesota and Colorado early. In Illinois, Summit Ridge Energy completed the state’s largest community solar project, which will produce 150 MW of solar energy and save utility customers $750,000 every year. Michigan’s Consumers Power is working on retaining 5 GW of solar by 2030. Northern Indiana Public Service Company (NIPSCO) has plans for 2.3 GW of solar and solar+storage to replace its coal fleet.

Solar is harnessing the raw power of the sun to light up our nation’s homes at a low cost while providing job security for families. As demand increases for clean, reliable renewable energy from utilities and corporate and industrial purchasers, solar energy capacity will help clean up the electric grid.

The sun is shining, and the future looks bright for solar.