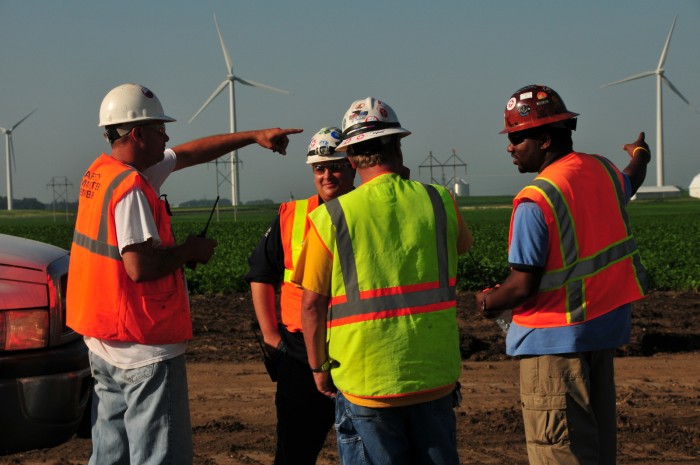 Renewable energy is here to stay.  According to a Business Council for Sustainable Energy and Bloomberg New Energy Finance report, solar and wind power accounted for 68 percent of new capacity in 2015, representing the largest source of new electrical power added to the grid.

Wind energy was the number one source of new electricity capacity additions last year. And, Iowa made it into the record books recently as the first state to generate more than 30 percent of their electricity from wind. But you don’t have to live in Iowa reap the benefits.  Renewable energy jobs are available across the nation.

All states can benefit from renewable energy whether you live in a state with a strong wind or solar resource or not. The wind industry alone supports 73,000 Americans with good family-supporting jobs.  Up to 20,000 of those are manufacturing jobs spread over 43 states in 500 factories across the nation.

The Wind Vision report , released by the U.S. Department of Energy last year, states that wind energy could supply 20 percent of the nation’s electricity by 2030 and up to 30 percent by 2050. The manpower required to achieve the 20 percent goal would create an additional380,000 jobs for the U.S. economy.  There are thousands of jobs in the solar industry as well.  The Solar Energy Industries Association reports more than 208,000 employees in installation, manufacturing, sales, project development and other jobs.  And in 2015, solar employment grew 12 times faster than the overall U.S. economy.

According to the U.S. Bureau of Labor Statistics, wind technicians are America’s fastest growing profession.  The Department of Labor expects the field to grow by 108 percent over the next 10 years. As wind energy continues to grow, so too will the manufacturing, operations and maintenance, and other jobs. This means that wind energy is a cash crop that the entire nation can benefit from, not just those fortunate to live in the wind belt.

Thanks to the growing U.S. manufacturing sector, a majority of the value of wind turbines are sourced domestically today. The steel industry is one industry with a big potential for growth.  Most of today’s modern turbines use rolled steel towers. The Wind Vision report states that for us to reach 35 percent wind energy by 2050, we would need to build 404 gigawatts (404,000 megawatts) of cumulative capacity.  At 127 tons of steel per megawatt of installed wind capacity, according to the 2001 U.S. Geological Survey, that’s a lot of steel.

Wind further bolsters the manufacturing industry with the over 8,000 component parts that are needed in modern wind turbines.  From the bolts larger than your hand, to nacelles the size of a school bus, 60 percent of the value of a wind farm is made in America.

Wind energy costs have fallen by two-thirds in the past six years, making it a cost-effective source of clean electricity; and the cost of solar has dropped 53 percent since 2010. As a result of technological advancements, improved economics, and environmental regulations, our nation is in the midst of transitioning toward renewable energy.

This is a movement that should be embraced.  Our environment is providing free harvestable resources to feed our hungry appetite for electricity. And, there are lots of great jobs entering the economy as a result.