New Study: Wind Energy is a Jobs and Economic Engine 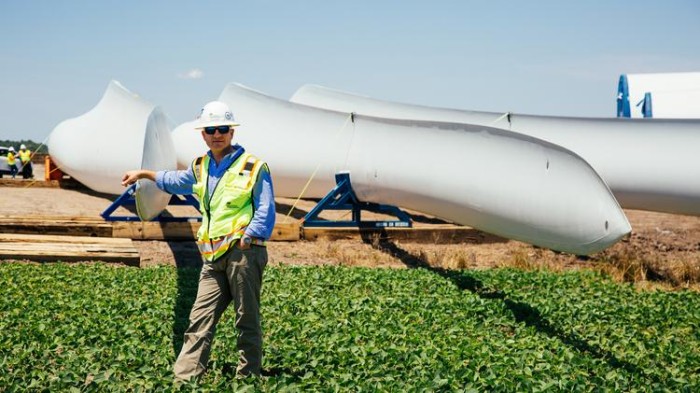 There’s a lot of talk about jobs these days. President Trump speaks often, and passionately, about bringing jobs (especially manufacturing jobs) back to America.  Wind energy is and will continue to be an important driver of the growth in American manufacturing and other family-supporting jobs across this nation.  And, according to a new Navigant study, more jobs are on the way.

The wind industry is an economic engine.  In 2016, wind power installations represented more than $14 billion in new investment.  That’s greater than the annual revenue of the National Football League.  Wind power currently generates 5.5 percent  of the nation’s electricity with 82,183 megawatts (MW) of installed capacity generating clean, low-cost energy.  It is now the largest source of renewable electric capacity in the U.S., eclipsing hydropower, and its growth spurt is expected to continue. The new report by Navigant finds that wind could grow by 8-10 gigawatts (GW) per year through 2020, resulting in 35 GW of new U.S. wind installations by 2020. This means more jobs and economic development will follow.

The wind industry currently supports over 100,000 jobs across all 50 states, and wind technician is the fastest-growing job in the nation.  Domestic manufacturing of turbine components is growing strong. Over 500 U.S. factories build wind-related parts across 43 states. They currently employ more than 25,000 workers, and Navigant forecasts that number will grow to 33,000 by 2020.

Navigant also estimates that jobs in manufacturing, operations and maintenance, construction, combined with induced jobs resulting from spending by workers involved in the industry at restaurants, hotels, and mechanics, among others, will grow to support 248,000 American jobs by 2020. The job opportunities span the nation and are even significant in areas like the Southeast where there is little or no wind development.  With over 60 wind-related factories Ohio ranks first in the nation for manufacturing, followed by Texas (40), Illinois (35), and North Carolina (27). Michigan, Pennsylvania, and Wisconsin round out the top slots with 26 plants each.

Despite the manufacturing stronghold in the rust belt, the Southeast also is a manufacturing hub with more than 100 wind component factories in the area. According to the report, North Carolina, for example, is projected to see 4,300 wind jobs by 2020.  The report also projects the Southeast could see a total of 22,800 wind jobs in the same year.

The wind industry is investing in rural America in nearly unmatched ways, giving many struggling communities a vital boost to the local economy.   About 71 percent of wind capacity is located in low-income counties, according to Navigant.  This means that the tax revenue, land lease payments, and jobs are flowing to the very places that need it most.

Furthermore, the growth of new wind projects is expected to generate over $8 billion in taxes over the next four years.  This is on top of the tax revenues from existing projects that are already helping many small towns fix roads, build schools and improve emergency services that benefit everyone.

Clearly, the entire country benefits from wind power – whether it’s in the form of jobs, a healthy rural economy, or the clean air and water that result from the growing use of renewable energy.

The wind energy industry is booming, and that’s a good thing for our economy and for America. With popular support from utilities, businesses, grid operators, and the general public, it’s no surprise that reliable, low-cost wind power is flourishing.  Make no mistake, wind works for America.