Minnesota is a national leader in the advancement of renewable energy and is home to over 180 companies working in the wind, solar, and storage industries according to a recent report by the Wind Energy Foundation’s “A Renewable America” campaign. The report also stated over 8,700 Minnesota jobs are supported by these technologies alone.

In addition, leaders from the American wind, solar, and energy storage industries, who all appeared together on stage for the first time during an event held by the Clean Grid Alliance, also shared impressive job growth data to complement the report.

“The Midwest is a bright spot for renewable energy development, and that translates to jobs,” said Beth Soholt, Executive Director of Clean Grid Alliance. “Minnesota’s strong support of renewables is driving robust jobs and economic growth, making the state a national leader. And, that’s something we should be proud of.”

According to the US Bureau of Labor Statistics, solar installer and wind turbine technician are projected as the fastest-growing job categories through 2026. A recent report by the Minneapolis-based McKnight Foundation found the state could create an additional 44,000 jobs in the wind and solar industries by 2050.

Due to falling costs and customer demand, solar and wind energy have grown tremendously in the nation. Tom Kiernan, CEO of the American Wind Energy Association, noted that there are currently 38 gigawatts of wind energy under construction. “Wind energy now employs over 105,000 Americans, and here in Minnesota it employs over 3,500,” said Kiernan. “Recent studies anticipate more than doubling the number of wind jobs in Minnesota. It should come as no surprise that a leading state for wind energy like Minnesota will see the benefit of job growth.”

“Careers in renewable energy are without a doubt the fastest-growing and most exciting career opportunities out there,” said Abigail Ross Hopper, president and CEO of the Solar Energy Industries Association. “Solar employs over 250,000 people in the country. It’s growing rapidly and quickly, but one of the most exciting things is that two-thirds of solar jobs do not require a college education. Solar is accessible to all members of our community.” Nationwide, 27 percent of the solar industry’s workforce are women.  The Midwest, generally, was the fastest-growing region for solar growth last year.  She added that Minnesota’s policies and community gardens are a great way for everyone to take advantage of the benefits of solar, and Minnesota has been a leader in this area. "Minnesota shows how quickly the solar industry can bring clean energy and jobs to a state with the right policies," said Hopper.

Kelly Speakes-Backman, CEO, Energy Storage Association, explained that the growth of storage enables new and broader opportunities for a cleaner supply mix.  “Storage supports all forms of generation, and it is particularly adept at facilitating grid capabilities to integrate more clean resources,” said Speakes-Backman. “Energy storage is an enabling technology. As it increases the flexibility of the electric system, energy storage technologies foster an efficient, resilient, sustainable, and affordable energy system.”

Jobs in renewable energy extend far beyond construction and maintenance jobs. Engineers, lawyers, financial analysts, manufacturers, and many others make up the renewable energy supply chain in Minnesota and beyond. Leaders from Mortenson and Ulteig Engineers highlighted the recent growth of renewable energy, both within the state and nationwide in their remarks. 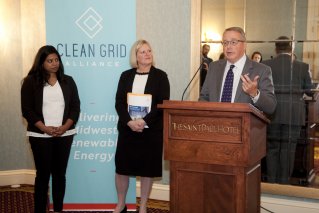 “Ulteig’s commitment to renewables has grown significantly since we developed our first wind project in 1998,” said Doug Jaeger, President and CEO of Ulteig. “Over the last five years we have increased the number of employees supporting the market by 150 percent, and we expect to nearly double the number of wind and solar projects we complete this year compared to last.” He pointed out that, “Minnesota’s economy has always been buoyed by the high-tech investment environment.” That, combined with the talent pool from the universities and technical schools in Minnesota, is a recipe for success. He said, “The ‘Now Hiring’ light is on, and it’s powered by renewable energy.” Jaeger noted that Ulteig has been hiring both skilled professionals and students graduating from local technical colleges to meet their needs. “I would encourage Minnesota college and technical students to seek this industry out, said Jaeger. “We are excited to celebrate our growth, and we look forward to hiring more in the future.” Another Ulteig employee, Andrew Melvin, added that, “it’s been really exciting to be a part of this trajectory of renewable energy. I’ve been doing this for my entire career, and I think we all share in the excitement.” 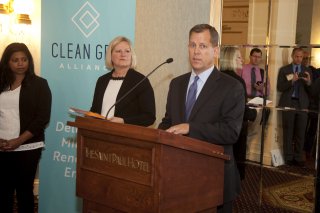 Brent Bergland, General Manager at Mortenson, shared that the company has flourished by joining the renewable energy industry. “The Minnesota economy has been growing from renewables for quite some time,” Bergland said. “We’ve grown from a little more than 400 team members in 2013 to slightly over 2,000 in the last five years.” Bergland continued: “[o]ur grid is evolving. We’re enabling it with new technology, integrating the intricate software with new resilient and reliable platforms that are making our grid operate more efficiently and more economically.”  Bergland also noted that the company will need more skilled trade workers, including electricians, operators, carpenters, ironworkers, millwrights, project managers, and more safety, quality, and other professionals in order to develop more renewable energy-related projects in the state and across the country.

To support this booming industry, trade schools are partnering with original equipment manufacturers who are making significant investments into training.  In fact, some are donating equipment to schools so students benefit not only from classroom training, but can receive hands-on training and will be ready to work after graduation.  As new technologies like energy storage advance, the industry is also taking strides to teach in the classroom and educate students on where the job opportunities are. 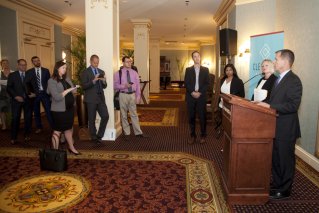 “Minnesota has a work-ethic that is unlike any around the country and that will pay off in dividends as men and women choose to enter this workforce,” said Bergland.

Minnesota is seen as a high-tech, technological investment state, according to Jaeger.  The jobs available in this industry are high-tech.  With the tight labor market we’re experiencing, Jaeger added, “the technical trades are challenging to get. However, this industry is an attraction that is causing this to turn.”

You can view our Facebook Live video of the press conference.