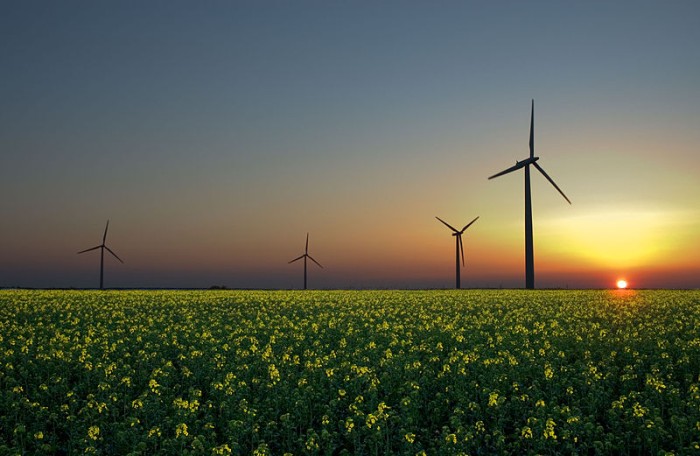 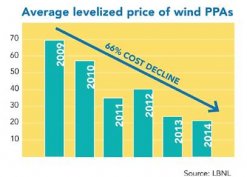 Doesn’t it feel great to get a good deal? It’s so gratifying to get something that you really want or need for a great price.

Wind is 66 percent cheaper than it was just six years ago, thanks to technological advances that make harvesting energy from the wind more effective and efficient than ever before. Improved America manufacturing has also driven down costs, which has the added benefit of creating good, family-supporting jobs for 88,000 Americans.

Numerous reports show wind energy is increasingly cost competitive when compared to other new sources of generation.  In many parts of the country, particularly in the Midwest, wind is often the cheapest source of new energy capacity.  That’s why utilities and corporate purchasers are investing in wind.  They’re scooping up bargains, and why shouldn’t they?   The best part is that when they do, we – the consumer – benefit from that free fuel in the form of lower electric bills.

Many people think – and others would like you to believe – that the only thing that keeps wind energy cost-effective is its primary incentive, Production Tax Credit (PTC), but that is simply not the case. Last fall, Lazard issued its Levelized Cost of Energy Analysis, which showed wind as the low-cost leader, even without the PTC.  The Energy Information Administration report also finds wind energy to be one of the most affordable choices for new electricity generation on the market. 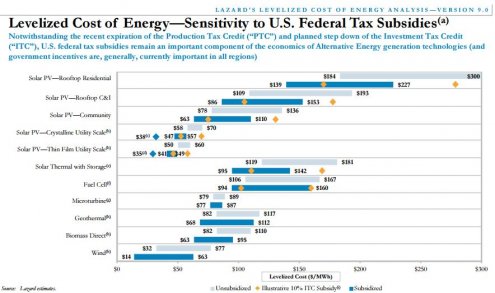 The truth is, wind energy receives only about two percent of total cumulative federal energy incentives. It’s not a mere hand-out, either; it’s the exact opposite.  Precisely as it its name implies the PTC is a tax credit based on production. That means the credit has to be earned, in order to be received.  And, in stark contrast to subsidies for other energy resources that have been written into the tax code for generations, the PTC is only available for the first 10 years of a project’s life.

A Congressional Research Service report from 2014 indicated that the cumulative value of the PTC was about $10 billion through 2015, while the Nuclear Energy Institute, for example, reports $594 billion in government subsidies for fossil fuels over the last 60 years, and $73 billion for the nuclear industry alone.

The PTC is an excellent example of a tax incentive that has actually worked as it intended.  It helped drive a market that now powers the equivalent of 20 million homes with clean, home-grown, renewable energy. At the same time it created well-paying jobs for thousands of Americans and brought a drought-resistant cash crop to landowners who host turbines on their property.  Entire communities benefit from wind projects, as tax payments from the developers flow to the counties and townships and are used to keep a lid on property taxes, support schools, roads, emergency services and services for seniors and veterans.

The way I see it, the wind energy industry is paying it forward by helping drive consumer electricity rates lower, fostering clean air and water, offering new sources of revenue for host communities, and creating family-supporting jobs right here at home.  With benefits like these, what’s not to celebrate?