Political will holding back significant wind development in Wisconsin 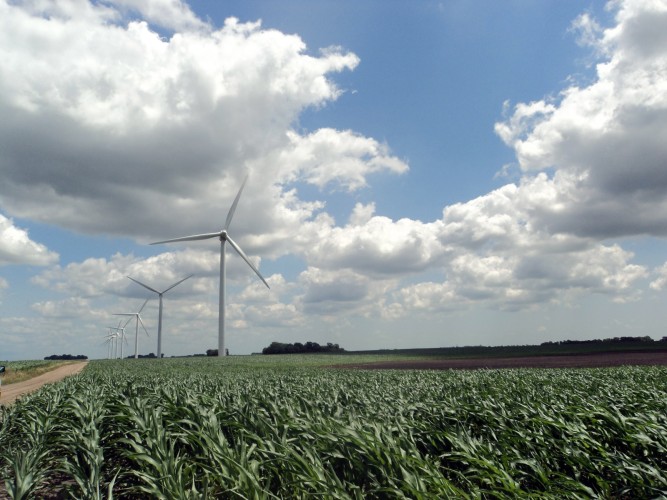 With the election heating up, politics are dominating our lives.  Ads, hyperbole, and mud-slinging often make us want to throw our hands up in despair; but we can’t throw in the towel.  The political rhetoric around energy at the state and federal level is not going away any time soon. And, in states like Wisconsin where the political will for wind development in recent years has seemed tenuous at best, vigilance is paramount.

In spring of 2011, just days before their expected enactment, the state legislature suspended the statewide uniform wind siting guidelines, resulting in the immediate cancellation or suspension of several large wind projects in the state.  This action effectively took about 700 megawatts of wind off the table for the Badger State.  This decision, coupled with newly-elected Governor Scott Walker’s (R) special session bill to establish 1,800-foot setbacks from non-participating property lines, sent shockwaves through the industry, and established Wisconsin’s reputation as “unfriendly” toward wind development.  As a result, Wisconsin is the only state in the Midwest that has not seen the development of any utility-scale wind facility in the past five years, and growth in this industry has largely come to a halt.  By comparison, during this period Minnesota has installed 517 megawatts of wind, Illinois has installed 1,100 megawatts, and Iowa has installed 2,043 megawatts.

At the height of Wisconsin’s wind development years between 2008 and 2011, over $1 billion was invested in Wisconsin by the wind industry, and between $1-5 million in land-lease payments are being paid every year.  Those numbers could be significantly higher, however. The 2015 Department of Energy’s Wind Vision report projects that by 2030, annual property tax revenue could grow to more than $14 million, annual land lease payments grow to nearly $6 million and the state could produce enough wind energy to power the equivalent of 592,000 homes.  Yet, with just 320 megawatts of coal slated for retirement over the next six years, the state remains committed to its aging coal fleet and mired in politically-motivated attitudes about energy. 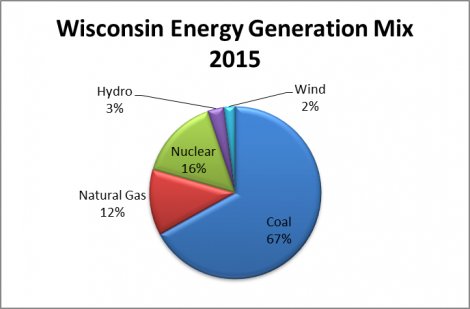 Approximately two-thirds of Wisconsin’s energy generation comes from coal, according to the Public Service Commission of Wisconsin’s recently released Strategic Energy Assessment: Energy 2022.   The average age of coal-fired power plants in Wisconsin is over 35 years. Five plants are over 50 years old and another 10 units have an average age of over 40. Rather than retiring these plants and investing in low-cost wind energy, Wisconsin’s ratepayers have been saddled with billions in emission control upgrades to the tune of $3.3 billion over the past 15 years.  In addition, regulators also approved a $2 billion coal plant that went into service in 2010.

The unfortunate effect of these choices is that the state has the highest commercial, and industrial electric rates in the Midwest, according to the federal Energy Information Administration, which is bad for business.  Conversely, the DOE’s Wind Vision report estimates that achieving nationwide growth in wind power to 35% by 2050 would benefit Wisconsin consumers with electricity bill savings of $1.11 billion through 2050.

Federal policies, like the Production Tax Credit (PTC) have been extremely important in leveling the playing field for wind development, but state and local policies are just as important.

In 1999, Wisconsin was one of the first states in the country to establish a small Renewable Portfolio Standard (RPS) – 10 percent by 2015 – which the utilities achieved with ease two years early. This policy paved the way for the development of Wisconsin’s existing wind energy sector.  Absent a meaningful increase in a state-level RPS, which is not being discussed at this point, or a dramatic shift in the attitudes of the state’s largest utilities, federal policies designed to reduce emissions like the Clean Power Plan (CPP)are the most likely drivers of new wind development in Wisconsin.

Unfortunately, the CPP has become the target of intense political rhetoric in Wisconsin. Governor Walker has gone so far as to issue an Executive Order expressly prohibiting the development or promotion of a state compliance plan. State Attorney General Brad Schimel has been at the national forefront in challenging the legality of the Clean Power Plan. These shortsighted decisions are sending yet another negative signal to the national clean energy industry. Meanwhile, neighboring states like Minnesota that are actively planning for compliance, despite the February 2016 Supreme Court stay, are putting themselves in the driver’s seat and sending a clear message to those same clean energy companies that their business is welcome in their state.

Wind remains the no-regrets option for meeting the state-level goal of the Clean Power Plan.  Lawrence Berkeley National Laboratory reports that the cost of wind has declined 66% in the past six years, creating bargain-basement prices that most utilities would have a hard time passing up.  Couple that with the PTC, which is at its full value through the end of 2016, and there should be a significant increase in wind project announcements this year.

The good news is that wind power continues to have bipartisan support from governors, members of Congress, and elected officials across the nation. Several polls are revealing that support for American wind power is growing.  According to a March 2016 Gallup poll, 73% of adults said the U.S. government should “emphasize the development of alternative energy such as wind and solar power.”  In addition, Lazard’s Alternative Energy Poll 2016, reveals that 90% of likely voters favor “expanding wind power” (up 12 points since 2012), and 81% of self-described conservatives favor “expanding wind power” (up 34 points from 2012).  The bad news is that despite these results, there appears to be a startling disconnect between the public opinion, the corporate sector, and the political powers at the state level in Wisconsin.

Johnson Controls, Inc., the largest public company in Wisconsin, is recognized for its innovations in energy efficiency and has a corporate energy and climate policy that supports legislation that advances clean energy technologies, among other things.  Two of the state’s largest employers, Kohl’s and Gunderson Health System, are strong supporters of renewable energy.  Kohl’s already purchases enough Renewable Energy Credits to offset 100 percent of their energy use.  Gunderson Health has two 2.5 megawatt turbines on its property; and SC Johnson’s manufacturing facility in Racine has two 1.5 megawatt turbines on its campus.

Manufacturing is the second-largest employment sector in the state, and with 27 manufacturing facilities supporting the wind industry, the AWEA 2015 market report ranks Wisconsin 5th in the nation.  One of those manufacturing plants is Broadwind Towers, located in Manitowoc, which is one of the largest steel wind tower producers in North America.  In June, Broadwind announced a $137 million contract, and in July received another $15 million in tower orders, which will keep their plant busy well into 2017. Despite its strength in manufacturing, the Clean Jobs Midwest report finds that Wisconsin’s clean energy workforce is the smallest in the Midwest, and points to improving state-level policies as a way to increase jobs in this sector.

There is some reason for optimism, however. Wisconsin is seeing a slight resurgence in interest and approved wind developments in recent months.  Before the Clean Power Plan was stayed in February 2016, several utilities began publicly expressing their desire to start working on a State Implementation Plan to include more renewables into the state’s energy mix.  In August, Alliant Energy Corp., expressed interest in investing in wind generation in Wisconsin shortly after announcing its plans to build 500 megawatts of new wind  generation in neighboring Iowa, a $1 billion investment into that state. In July 2016, WPPI Energy issued a 100 megawatt Request for Proposal, with a preference for in-state development.  Dairyland Power Cooperative announced a 98 megawatt Power Purchase Agreement from EDP Renewable Energy’s Quilt Block project in Lafayette County in Southwestern Wisconsin.  The Public Service Commission approved the Highland Wind project in St. Croix County over the summer, and construction could begin as soon as the end of the year.  Another 510 megawatts of wind was added to the MISO interconnection queue since May 2016.  These are all promising signs that overwhelming market forces are defeating the prevailing political winds in Wisconsin, but state policy improvements and strong leadership from decision-makers will be essential to expediting the state’s inevitable energy transition.

It seems obvious that lawmakers at the Capitol and regulatory agencies need to get in sync with what their constituents want and what their local businesses, big and small, are prioritizing.  A Wisconsin State Journal editorial in August also references political resistance to increasing the use of renewable energy. Wind on the Wires is actively engaged at all levels to help decision-makers see the benefits of wind energy and align their decisions with the needs and desires of the people and businesses they serve.  It’s time for lawmakers to change their “light and variable” attitudes to “strong and sustained” in favor of low-cost wind energy.

This article was written for and first appeared in North American Windpower magazine, September 2016.