Plenty of Land to Go Around 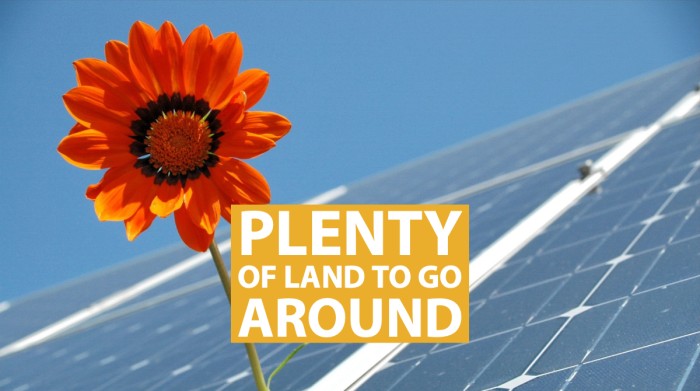 As solar prices continue to fall, the demand for it is increasing.  More and more utilities, corporations and the general public want electricity produced from solar farms. They are attracted to its environmental and economic benefits.

Minnesota currently has a 1.5% Solar Energy Standard (SES) and a state goal of reaching 10 percent solar by 2030. This is separate from Minnesota’s Renewable Energy Standard (RES). The state legislature is discussing several different ways to take the next steps on renewables – including increasing the RPS, using a “Clean Energy First” approach, or establishing a 100 percent carbon-free standard by 2050.  The state has made incredible progress incorporating renewable energy into its generation resources considering just a dozen years ago Minnesota established the Next Generation Energy Act, which at the time was considered quite ambitious and trend-setting at 25 percent renewable energy by 2025. In fact, Minnesota has achieved its 25% by 2025 RES eight years early!

As Minnesota contemplates increasing its use of renewable energy generation, solar, no doubt, will be an important part of achieving these goals. The cost of solar generation has decreased 88 percent since 2009; and despite our northern latitude, our annual solar resource is similar to parts of Florida and Texas.  In November 2018, the Minnesota Department of Commerce and Solar Pathways Project issued the Solar Potential Analysis Report, (SPA) which found that solar and wind can serve 70 percent of Minnesota’s electric load by 2050, and do so at a cost that is comparable to the cost of new natural gas generation.  The report suggests getting solar capacity to 10 percent by 2030 will grow our solar capacity from 250 megawatts at the end of 2016 to as much as 6,000 megawatts (6 gigawatts) of capacity.  To reach the 70 percent level, we would need 14 to 22,000 megawatts (22 gigawatts) of solar capacity by 2050.

Naturally, when we begin to hear such large numbers associated with solar energy development, the question becomes: “what does 22,000 megawatts of solar really mean; and do we have enough land to do this?”  The answer to the latter question is, “Yes.”

Let’s break this down step by step.

One megawatt of solar takes 7 – 10 acres of land.  Currently, the total land used for existing solar installations in Minnesota is approximately 8,500 acres.  By way of comparison, between 1982 and 2012, nearly twice as much land was converted from agriculture to other types of development, primarily housing. Using the most conservative estimate of 10 acres per megawatt, it would require roughly 60,000 acres or about 94 square miles to achieve our state goal of 10 percent solar by 2030.  This is about 0.1 percent of Minnesota’s entire land area. To achieve the 70 percent level by 2050, a conservative estimate of approximately 220,000 acres of land would be necessary.  This represents just 0.4 percent of our total land area.

Yes, we can have it all
So where should these solar installations be developed?  Minnesota ranks as the 12th largest state in the nation, with 83,574 square miles of land area.  An analysis of the existing land use in the state reveals that most of the state is covered by cultivated crops or deciduous forests.  Indeed, 37 percent of the state is used for agriculture for such crops as corn, soybeans, vegetables, in addition to perennial woody crops that include orchards and vineyards.  It also includes “all land being actively tilled.” 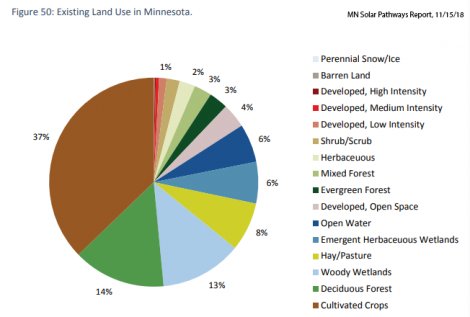 Agricultural land is the most obvious option for solar because it is naturally wide open space, flat, with few trees, all of which maximizes the ability to capture the sun’s rays. Also, there is usually good access to the transmission system in farming areas. 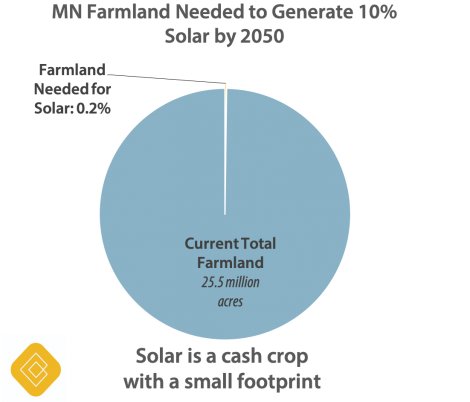 According to the USDA National Agricultural Statistics Service, Minnesota has 25.5 million acres of farmland, which is equivalent to 39,870.28 square miles.  If we used only farmland to reach Minnesota’s 10 percent solar energy goal, that would require only 0.2 percent of the 25.5 million acres used for farming crops.  To reach the 70 percent level referenced in the SPA report, only 0.86 percent of farmland would be needed.

Using farmland for purposes other than growing crops isn’t new.  For comparative purposes, consider the fact that Minnesota also has over 1 million acres enrolled in the Conservation Reserve Program (CRP), which allows farmers to take their land out of production for a period of time for conservation purposes. That’s over 1,600 square miles that aren’t being farmed.   We could accomplish our 10 percent goal for solar using only 5.6% of the land area that is enrolled in the state’s Conservation Reserve Program, or about 20 percent of CRP-designated land to reach the 70 percent target.

As we continue to analyze how land is used and are sensitive to ensuring there is enough prime and other farmland available to meet our food needs, it is interesting to note that according to the Agricultural Census Data, the number of acres used for agriculture in Minnesota has declined seven percent between 1997 and 2017, yet yields are on the rise. 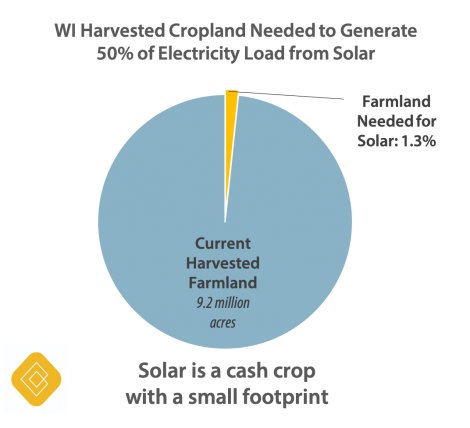 In Wisconsin, where over 4,700 megawatts of solar are in the pipeline, there is a similar story.  In 2017, farmers harvested crops on about 825,000 fewer acres than they did in 1982. Yet, yields and total production are increasing.  “If Wisconsin wanted to obtain 50 percent of its current annual electricity consumption from utility-scale solar farms, it would require about 0.12 million acres, or 1.3 percent of the state’s 9.2 million acres of harvested cropland,” said Tyler Huebner, Executive Director, RENEW Wisconsin.  “If this much solar were built, local townships and counties who host the projects would receive $68 million annually, in accordance with state law, and $84 million or more would be paid annually to local farmers and landowners who would voluntarily lease their land to host these projects.”

Nevertheless, despite the declines in land used for agriculture, yields are increasing.  In Minnesota and Wisconsin, yields for both corn and soybeans continue to increase as a result of innovation in biotechnology and seed blends.  This innovation is likely going to continue.  As a result of our ample supply of crops, prices are at historic lows creating a need for farmers to find new ways to diversify their revenue streams.  Solar is a great option.

On an average annual basis, there are over twice as many farm acres planted that fail due to flooding, storm damage, or blight as there are that would be needed to generate solar energy when we meet the 10 percent energy goal.

Solar farming can offer a consistent, drought-resistant source of income for rural farmers and their local economies.  In Minnesota, on an average annual basis, there are over twice as many farm acres planted that fail due to flooding, storm damage, or blight as there are that would be needed to generate solar energy when we meet the 10 percent energy goal.  Still, we are able to meet our needs, and have plenty for other uses such as ethanol, animal feed, and exports to other countries.

Anytime infrastructure projects are planned, finding the right place to put them becomes a very important part of the process. Community input is a major consideration.  Every community will have a say about what they would like to see in their community, but the Minnesota Public Utilities Commission is responsible for permitting solar farms over 50 megawatts. For projects under 50 megawatts, solar developers may go through the local permitting process.

There are lots of things to consider.  But fear about using the land for solar instead of farming should no longer be a source of concern.  The bottom line is that Minnesota and Wisconsin have plenty of land to accommodate our agricultural, recreational, and development needs.  And, in fact, growing our solar energy industry is just smart.