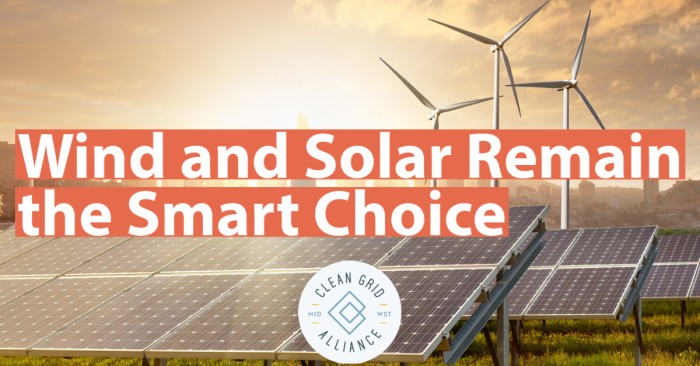 Getting the best deal is something everyone enjoys. In the last decade, renewables have been coming up as affordable, reliable resources that stimulate economic activity and reduce carbon emissions. Every year, energy experts and advocates look forward to the latest Lazard Levelized Cost of Energy Analysis and Levelized Cost of Storage report to get a full understanding of renewable energy progress. According to this year’s report, wind and solar energy continue to provide the biggest bang for your buck in a competitive marketplace.

Compared to the prices of fossil fuels and natural gas, renewables are giving the industry a run for their money. Wind energy is currently the cheapest resource on the energy market, with an unsubsidized cost range of $26-54/Megawatt-Hour (MWh). Utility-scale solar energy is also a least-cost resource, with an unsubsidized cost range of $31-42/MWh. The study also notes that it is more cost-effective to build a new wind or solar plant than to purchase from existing coal ($65-159/MWh) or natural gas ($44-$73/MWh) facilities. As technology improves and companies diversify their portfolios, long-duration storage is also gaining traction as a component of wind and solar projects.

The Rise of Renewables

Renewable energy has been a hot topic in the last decade. As wind and solar prices have fallen, companies and utilities seized on an economic (and environmental) opportunity. Wind energy costs have declined 70 percent in the last decade, and with no fuel cost, that low price is guaranteed for the lifespan of a project. Wind energy is the largest energy source in the renewable energy sector. At 110 gigawatts (GW), wind accounts for over seven percent of the nation’s electricity and powers 32 million homes. In six states, wind accounts for over 20 percent of overall electricity produced, and is the largest power source in the state of Iowa. Since 2009, solar prices have decreased 90 percent. Currently, the U.S. utilizes 85 GW of solar energy across the country. That’s enough capacity for over 16 million homes.

Although utilities originally thought natural gas would bridge the gap in the transition toward clean energy, energy storage is also entering the mix. The Lazard study shows that storage costs have declined for all use cases and technologies. But long-duration storage is still something the industry is eager to obtain. Right now, lithium-ion batteries have been the best option, operating at gigawatt scale for up to 4 hours at a low-cost rate. However, in October 2020, the first major request for proposals targeting long-duration projects was formed in California. Eight companies, led by Silicon Valley Clean Energy, published a request for offers seeking 500 MW of long-term storage capacity after regulators said the state would need one GW of long-duration storage by 2026. In Minnesota, Form Energy secured a deal with Great River Energy for a storage project that could operate for a 150-hour-duration.

With renewables now in strong economic standing, and as America transitions to a clean energy economy, utilities have set carbon-reduction goals to address the impending climate crisis in the United States and capitalize on low-cost, carbon-free electricity. In 2016, Minnesota-based Xcel Energy became a trend-setter when they announced the replacement of half of its coal-fired capacity with wind energy, declared to be 100 percent carbon-free by 2050, and encouraged other utilities to follow suit. This year, Xcel Energy, along with five other Midwestern utilities serving the states of Wisconsin, Michigan, Iowa, and Missouri, have all divulged they expect to retire a combined 5.8 GW of coal by 2022 and 2023. This capacity will be replaced by a combined $15 billion investment to install or buy about four GW of solar, more than 3.6 GW of wind and over one GW of battery storage.

As the years roll by, renewable energy is destined to become an even bigger player in the U.S. electrical market. The Lazard report predicts that renewables will power 80 percent of our overall electricity needs in the next 10 years. Technology advancements, particularly in the wind industry, have enabled a future with more wind capacity. According to the American Wind Energy Association (AWEA), modern turbines are reaching stronger, steadier winds. About 27 percent of the turbines installed so far in 2020 are rated 3 MW and higher, with three projects using four MW machines. A total of 44 GW of wind energy is projected by the end of 2020, powering another 15 million homes. So far, 36 utility-scale wind projects have been completed in 16 states, including Iowa, Illinois, Michigan, South Dakota, Indiana and Minnesota. In fact, 22 percent of all new project construction in the Midwest comes from new wind projects. Solar energy will also play a part in this. In 2019, 40 percent of all new electricity came from solar.

The facts don’t lie: wind and solar are reliable, low-cost energy resources that are propelling the U.S. into a clean energy future. It’s the dawn of a new, cleaner era.