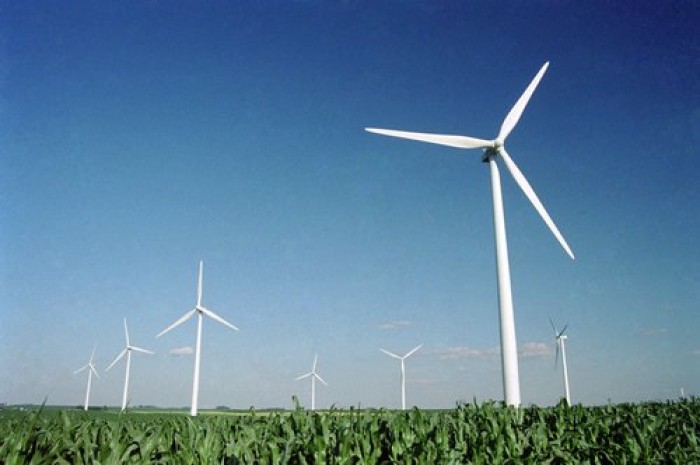 Just a little less than a year ago, the Department of Energy set an ambitious, and some said unachievable, target: By 2030, wind could supply 20 percent of U.S. electricity.

Today, because of American ingenuity and production-based policies, we’re on track to reach or exceed that goal.

In 2015, wind power was the largest source of new energy capacity in the U.S., representing 35 percent of all new electricity to come online. That’s more than either solar or natural gas. And America remained the world’s largest wind energy producer, generating more electricity from wind than China, Germany or any other country.

So much wind power came online last year that the total amount installed in the U.S. is enough to produce power for 19 million American homes. That’s also enough power to drive 26 million electric cars around the world.

No region of the United States exemplifies this progress better than the American heartland.

More than 31 percent of Iowa’s electricity was generated by wind power last year, the first time a U.S. state topped the 30 percent milestone.

Similar gains have been made in Minnesota, where in a little over a decade, the amount of electricity generated by wind increased from three percent in 2005 to more than 17 percent in 2015.

A dozen states now use wind to reliably produce at least 10 percent of their electricity.

Meanwhile, the manufacturing sector in Michigan and Illinois has been rejuvenated because of wind power. These long-time hubs for Made-in-the-USA products are now forging ahead as leaders in wind turbine assembly with 72 wind-related factories. Combined with the jobs created to build and maintain wind farms, wind supports 8,000 well-paying jobs with benefits spread across both states.

The good news is that wind power is just getting started. Because of taller towers, longer blades, improved gearboxes and more than 30 years of experience siting wind turbines to maximize power output, wind’s costs have by fallen two-thirds in the last six years.

These savings are passed on to American families and businesses. During 2014’s “Polar Vortex” weather event, wind saved Great Lakes and Mid-Atlantic consumers more than $1 billion in just two days. And as the U.S. has increasingly generated more of its electricity from renewable energy, electricity rates across the U.S. haveremained 5.5 percent lower than they were in 2009.

Generating more electricity from wind energy in these states could result in even more savings for consumers across the heartland. According to data calculated using the U.S. Department of Energy’sWind Vision report, through 2050 consumers in Iowa, Illinois, Michigan and Minnesota could save a combined $10.97 billion on their electricity bills. That’s on top of more than $36 billion in savings resulting from protection against conventional fuel price spikes.

America’s heartland is leading the way toward a homegrown, affordable, clean energy future. It provides a clear example for the rest of the country that expanding our share of wind power can create jobs while saving money, strengthening America’s energy independence and improving lives along the way.

This Op-Ed appeared in The Des Moines Register and the Lansing  State Journal.