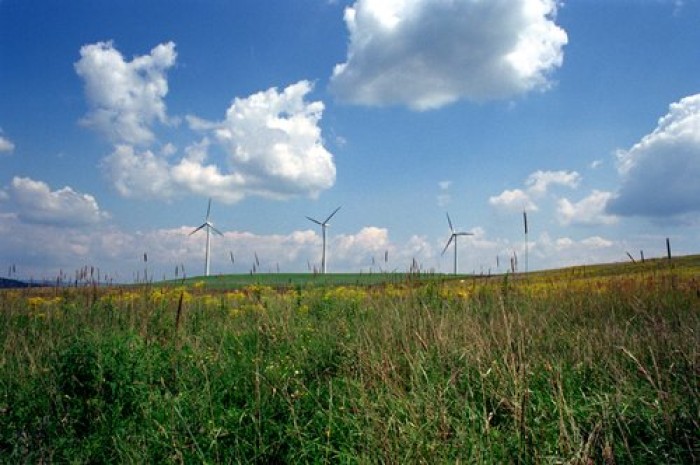 Iowa has long been known for its agricultural prowess – helping feed the nation with its corn, soybeans, pork, beef, and dairy products. However, a new cash crop has emerged in Iowa: wind energy. In fact, a new milestone was set in 2015 when Iowa became the first state in the country to generate more than 31 percent of its electricity from wind.

America’s heartland is helping create a homegrown, affordable, clean energy future, and Iowa is leading the charge.  Today, Iowa boasts 6,212 megawatts of installed wind capacity ranking it second in the nation. Approximately 7,000 Iowans work in the wind industry, either directly or indirectly, and 12 active manufacturing companies have set up shop in the state.

Through all this success, political leadership has remained constant in Iowa.  It is difficult to overstate Governor Terry Branstad’s (R) role in driving Iowa’s transition to affordable, reliable clean energy. He has supported the extension of the Production Tax Credit at the federal level, and back at home, he has directed his state agencies to develop a robust process to implement the Clean Power Plan. Both policies translate to huge opportunities for Iowa to build on its already outstanding renewable energy economy. Branstad is co-chair of the Governors’ Wind & Solar Energy Coalition, a bipartisan group of governors who are dedicated to developing the nation’s renewable energy resources to meet the country’s domestic energy demands in an environmentally responsible manner.

As if that wasn’t a strong enough demonstration of his support for our industry, on February 16, 2016, Branstad went a step further by joining 16 other Governors in signing the “Governors’ Accord for a New Energy Future,” which outlines six new energy solutions to modernize our infrastructure, decrease air pollution and support the growth of innovative American companies, among other things.  Branstad’s interest in tackling the difficult questions around what it takes to build a clean energy economy in a collaborative and inclusive fashion is a model for other governors. Putting politics aside, he works with all other interested parties to identify the policies that are needed to advance renewable energy in our country. His vocal support for wind and solar, in a variety of venues, have made Iowa a hotbed for renewable energy development, resulting in increased investment and more jobs and tax revenue in the Hawkeye State.

Branstad has also leveraged Iowa’s reputation as a wind energy leader to successfully market Iowa to new businesses.  Not only have wind companies like TPI Composites and Siemens opened up manufacturing facilities in Iowa over the past decade, large corporations like Google and Facebook are attracted to Iowa because of the access to clean, low-cost wind power, and their desire to power their energy-intensive data centers entirely with renewables.    “When we settled on Altoona as the location for our fourth data center, one of the deciding factors was the opportunity to help develop a new wind project in the state,” the Facebook blog says. “The project will add up to 138 MW of new renewable wind capacity to the grid in Iowa – more than what our data center is likely to require for the foreseeable future.” Vincent Van Son, Data Center Energy Manager, 11/13/13.

MidAmerican Energy, the state’s largest utility, is also a leader in wind. They have invested $6.7 billion in wind generation, making it the nation’s leading rate-regulated utility in terms of wind ownership and wind power now makes up the largest share of the utility’s generation portfolio.  Best of all, their ratepayers are enjoying significant and direct savings from these investments.

"Without a doubt, our investment in wind projects has been good for our customers, good for communitiees, good for the environment and good for the state of Iowa," said MidAmerican Energy Vice President of Renewable Energy Mike Gehringer.

The U.S. Department of Energy’s Wind Vision report released last year estimates a total electric bill savings for Iowans of $3.6 billion through 2050 if the state continues to capitalize on its world-class wind resource.

Keeping up the momentum

With all that Iowa has going for it, the state must not rest on its laurels.  The Clean Power Plan (“CPP”) is merely an acceleration of the transition to a clean and cost effective renewable future that has already begun.  Wind energy remains the biggest, fastest, and cheapest source of new electric generation, and as such, despite the Supreme Court’s recent stay of the CPP, many states are continuing to develop their State Implementation Plans (“SIP”). Iowa is one of these forward-thinking states.

At Gov. Branstad’s direction, the Iowa Department of Natural Resources is leading a stakeholder process for developing Iowa’s SIP. Many utilities in Iowa and elsewhere in the Midwest are also moving forward in their plans for a low-carbon future, identifying ways they can integrate low-cost, reliable wind power and other renewable sources in their electric mix.  The Production Tax Credit, which was extended last year, will motivate states and utilities to add wind power, with or without the CPP.

Iowa could be the first state in the nation to meet 40% of our energy needs from wind power by 2020; far ahead of any other state. The extension of the Federal Wind Energy Tax Credit will also help us grow wind investments and jobs in Iowa. Our leadership in green energy not only makes us a leader in renewables but also powers job growth. Every wind turbine you see while driving across our state means income for farmers, revenue for local governments and jobs for Iowa families. Let’s build on that foundation for a greener Iowa future,

"Iowa could be the first state in the nation to meet 40% of our energy needs from wind power by 2020; far ahead of any other state. The extension of the Federal wind Energy Tax Credit will also help us grow wind investments and jobs in Iowa. Our leadership in green energy not only makes us a leader in renewables but also powers job growth. Every wind turbine you see while driving across our state means income for farmers, revenue for lcoal governments and jobs for Iowa families. Let's build on that foundation for a greener Iowa future," said Gov. Branstad during his 2016 Condition of the State, delivered on January 12, 2016.

Transmission is key to helping Iowa maximize its wind development potential. Businesses, communities, and landowners in Iowa recognize the benefits of in-state wind energy development. However, new pathways to export their product to other markets is needed to ensure those tangible benefits continue to grow. The energy system in the Midwest is changing, and Iowa is uniquely situated to drive this transition. However, in order to deploy wind energy quickly and at a large enough scale to maintain affordable, reliable electricity in the region, a renewed look at the state's regulatory framework is needed.

An important and much-needed step toward improving the transmission system, removing bottlenecks, and providing a “road to market” for wind energy came in 2011 when the Midcontinent Independent System Operator (“MISO”) approved 17 Multi-Value Transmission Projects (“MVP”).  There are four MVP transmission projects that are located in Iowa, two are currently under construction. These 345 kV projects traverse Iowa and are expected to be completed by 2018, creating new opportunities for wind energy growth in Iowa.  The Cardinal-Hickory Creek (from Iowa to Wisconsin) and Ottumwa-Zachary (from Iowa to Missouri) transmission lines are still in the state regulatory approval process.

Another pathway for exporting Iowa wind is Clean Line Energy Partners’ Rock Island Clean Line transmission line.  It will have the capacity to deliver nearly 4,000 megawatts of clean energy into northern Illinois from northwestern Iowa.  Unfortunately, the state’s transmission line approval process is posing a regulatory roadblock. The Iowa Utilities Board (“IUB”) holds a single hearing on the need for the transmission line, siting and routing and whether the transmission owner should be given any eminent domain rights.  The IUB process requires the transmission developer to acquire as many easements as possible prior to making a final, formal request for approval. This approach is less of an obstacle for large utilities that can pass all the costs along to their customers. However, it does present a real challenge for private transmission developers, who, after initial investments determining the exact route and acquiring permits, must then bear the substantial up-front cost of acquiring easements on a route that has not been approved and may be changed.  Without an assurance that the IUB would approve the transmission line, it is difficult – and costly – for a company to move forward with customers and landowners. Balancing the opportunities for local investment in wind energy with the crucial need for real public input is not an easy task for policymakers and regulators, but Iowa’s continued leadership in this area hinges on a well-crafted, creative solution to this issue.

In the end, the story of wind energy in Iowa is one of success. Political leadership, forward-thinking utilities, and access to a top-notch resource have converged to make the Hawkeye State a torchbearer for wind power and the clean energy economy in this country. But the job isn’t done. Like with any growing industry, there are challenges that must be overcome. Wind on the Wires, and our membership of wind companies and non-profit partners, looks forward to working with all interested parties in Iowa to tackle these obstacles, so that together we can ensure the continued success of this sector and drive new investment, new tax revenue, and new jobs in the state.

Chris Kunkle is the Regional Policy Manager for Iowa, Minnesota, North Dakota, South Dakota, and Wisconsin. You can reach him via email at ckunkle@cleangridalliance.org. You can follow him on twitter @ChrisKunkle.