Harvesting the Wind Delivers Many Benefits

Wind energy is helping to keep electricity costs 14 percent below the national average here in Minnesota. How can that be possible? Electricity bills are lower in Minnesota because we are active conservationists.  We conserve our environment, we conserve energy, and our utilities are helping us take advantage of our clean, renewable, low-cost energy resources.

Our electric grid operator, the Midcontinent Independent System Operator (MISO), selects the lowest cost energy resource to meet demand first then moves on to the next lowest cost source until the demand is met.  The “fuel” cost of wind energy is free, which drives down the cost of electricity from our electric grid.  So, the more we can supply our demand with low-cost energy the better off we will be – financially and environmentally. 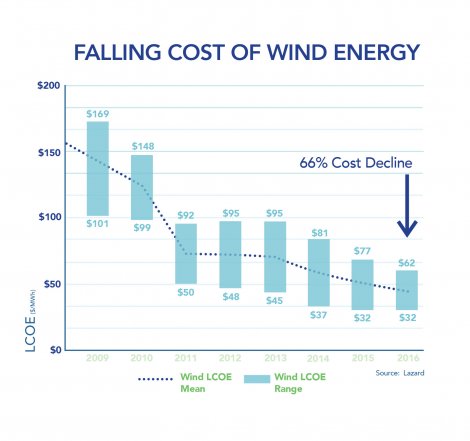 Utilities are taking notice of the dramatic reduction in the cost of wind energy, which has fallen by two-thirds over the past seven years. In fact, wind energy is now the least expensive source of electricity in the Upper Midwest.  Just last spring, Xcel Energy’s CEO Ben Fowke recommitted the utility’s investment in wind energy citing its clean and low-cost benefits for their customers.  "We're investing in wind because of the tremendous economic value it brings to our customers. Wind energy is saving our customers billions of dollars in fuel savings," said Fowke. "We're also delivering on the environmental front by deeply reducing carbon emissions while providing a clean energy product our customers want.”

Xcel Energy isn't the only utility investing in wind energy for its low cost. Great River Energy, which serves 28 electric distribution cooperatives with 685,000 members in Minnesota, has begun incorporating more wind energy to meet its electrical generation needs. "Wind [energy development] is driven by economics, especially when looking at new additions," said Jon Brekke, vice president and chief marketing officer for GRE. "Economics and increased customer preference for renewable. All major utilities are buying the power because it works." Additionally, Dairyland Power Cooperative has added more than 200 MW of wind and solar generation in the past two years "[b]ecause we think it's just good economics, it's sustainable, it's what our members want," said CEO Barb Nick. "I'm more happy about the economics." Dairyland Power Cooperative services 24 member systems of nearly 260,000 customers.

We're investing in wind because of the tremendous economic value it brings to our customers. Wind energy is saving our customers billions of dollars in fuel savings. We're also delivering on the environmental front by deeply reducing carbon emissions while providing a clean energy product our customers want.

On a national level, according to an article by Public Utilities Fortnightly, electric bills in 2017 were lower than they have been in decades as a percent of consumer expenditures.  This is an important metric because it means that consumers are spending less on utility bills and can, therefore, use that money for other things.  Their analysis shows that for the fourth quarter of 2017, electric bills were 1.34 percent of consumer expenditures, which is the third lowest percent since the first quarter of 1959.  The second and third quarters of 2017 had the lowest rate at 1.29 percent. To put this into perspective, according to the Bureau of Labor Statistics, the average expenditures on “food away from home” was 4.2 percent; “entertainment expenditures” were 3.9 percent; and apparel was 2.41 percent of the average income before taxes.

Is Carbon Reduction Really That Important?

Of course!  Who doesn’t marvel at the beauty of a crystal-clear blue sky?  To see that even around major metropolitan areas is even more spectacular.  Smog and haze not only pollute our atmosphere (and are ugly); they also contribute to increased rates of asthma and can contaminate our water. Back in 2007, Governor Pawlenty and a bipartisan group of legislators passed the Next Generation Energy Act, which established a Renewable Portfolio Standard that committed utilities to generate at least 25 percent of its power from renewable energy by 2025, and 30 percent by 2025 for Xcel Energy.  Ten years later, Minnesota has seen more than 170 new clean energy businesses, mostly small and medium-sized employers.  Nearly 40 percent of clean energy and energy efficiency jobs are in greater Minnesota, and the clean energy sector employs over 54,000 workers across the state. Moreover, Minnesota has seen a 32 percent increase in “good” air quality days, which means fewer life-threatening illnesses like asthma, heart disease, and cancer.

In January 2017, the Minnesota Pollution Control Agency issued a report on its progress toward achieving the Next Generation Energy Act goals.  Minnesota’s greenhouse gas emissions come from a variety of economic sectors, including:

Electricity generation is the largest source of Green House Gas (GHG) emissions, accounting for 29 percent of the state’s overall GHGs.  However, the report also indicates that the electricity generation sector has seen the largest reduction of emissions of any other sector with a 17 percent decline from 2005 to 2014.  This is largely due to reductions in the use of coal for electricity generation and increased use of renewable wind and solar power and relatively cleaner natural gas. While other sectors like transportation and agriculture have seen modest declines, other sectors have seen increases.  That said, the good news is that even as our state’s economy and population have grown, our GHG emissions have declined.  And, the energy sector is poised to do more to help reduce the state’s overall carbon emissions.

Don’t be misled into thinking that because Minnesota hasn’t met our GHG reduction goals we should stop trying. That’s a defeatist attitude.  Instead, we should rise to the challenge in areas where we can be successful.  And that, my friends, lies in doing more in the electricity generation sector, where progress is much easier to measure, and cost-effective to implement.  Wind energy currently provides over 17 percent of our state’s electricity needs. As utilities and corporations request more clean, low-cost renewable energy, the opportunities to further reduce our carbon emissions while expanding our clean energy economy and keeping electricity bills low, also presents a wonderful opportunity for our local farmers to enter a new and growing market for a drought-resistant crop – wind energy. It’s just smart.