Looking Back on 20 Years

On June 12, 2001, Clean Grid Alliance – then known as Wind on the Wires – held its first Advisory Committee meeting.  Wind on the Wires was launched as a two-year project of the Izaak Walton League, and funded by the McKnight Foundation and Energy Foundation to develop renewable energy resources in the Upper Midwest. It was the centerpiece of a much larger, $4.5 million round of funding by the two foundations. Then, and now, it was to be a partnership of the business community, local leaders, clean energy advocates, and wind energy experts.

The original goals and objectives for Wind on the Wires were as follows:

a. Identify high priority upgrades
b. Work with utilities, state and federal regulators and local communities to complete the upgrades

3. Identify decision-makers at the local, state and federal levels and enlist their support for transmission improvements. Educate key decision-makers on the benefits of wind power for the region.

In a press release from the American Wind Energy Association (AWEA, now American Clean Power Association), the purpose of the organization was to “facilitate the marketing of wind power by overcoming the two main hurdles that limit large-scale development:  bottlenecks in the power grid and antiquated transmission rules.” In addition, the organization would “work with transmission planners and the grid operators to solve technical issues and overcome regulatory hurdles; work with economic development officials to enlist their support for transmission improvements and wind development, and educate state, local and federal officials on the benefits of wind power for the region.” The leadership of this organization has adhered to the organization’s original mission, which has essentially remained true to its objectives and only expanded, for the entirety of two decades.

A number of people and organizations have stayed connected to the organization since its inception in 2001. Specifically, Beth Soholt has served as the Executive Director since June 3, 2002. Michael Noble served on the Board of Directors for many years and his organization, now known as Fresh Energy, is still a member. Paul White was also on the original steering committee and his company, PRC Wind, remains an active member. The Sustainable FERC Project has also been an active colleague organization over the years.

The  MVPs was a true grand slam. I'm really proud of the whole crew.

In the original press release on the formation of Wind on the Wires, Paul White, who was Midwest Project Manager for enXco, and is now President of PRC Wind, said, “We are poised to expand markets for wind power and build a thriving industry in Minnesota and the Dakotas. To move wind power to large markets such as the Twin Cities, Chicago, Des Moines and St. Louis, our top priority must be to remove the physical bottlenecks of the current power grid and upgrade the system. These upgrades will also improve the reliability of the system for consumers.”  He added that the organization would also be “working to update government rules so that wind power has fair access to the market.” When asked about the key accomplishments CGA has made in the last 20 years, Paul pointed to “the big mama,” saying, “the MVPs was a true grand slam.”  He added that, “Bill Grant had a really great idea, and I tried to sell it to other developers ... . Wind on the Wires ideas have blossomed under Beth’s leadership.”

It's truly remarkable what you have accomplished in charting a path to market for clean energy.  Congratulations on 20 years and full speed forward.

Eric Heitz, who was the co-Founder of Energy Foundation, was also quoted in the original press release saying, “Wind power is the fastest growing source of electricity in the world, and the Upper Midwest has been a focus for new development in recent years. This region is rich in wind resources with five of the 10 windiest states in the country in the Upper Midwest. Tapping this potential could mean billions of dollars of investment in the region.”  Reflecting on his comments from 20 years ago, Eric, said, “When we helped launch Wind on the Wires, now Clean Grid Alliance, we hoped it could be a force for good in the Midwest, and by example for the rest of the U.S.  Clean Grid Alliance and its many allies exceeded our wildest expectations — it's truly remarkable what you have accomplished in charting a path to market for clean energy.  And, the Midwest remains at the heart of America's clean energy solution, not only in terms of decarbonizing the power sector with wind, solar, and storage, but in building the electric vehicles and charging infrastructure for clean mobility. Congratulations on 20 years and full speed forward."

After the first full year of operation, Wind on the Wires had made significant progress in establishing itself as a subject matter expert and important resource on wind development and transmission issues in the Midwest. The staff made several technical presentations, held a transmission workshop, and engaged in the Xcel Energy Certificate of Need case for the new Sioux Falls – Lakefield Junction 345kV transmission line, offering conditions that would require Xcel to sign purchase agreements with wind developers for a total of 825 megawatts of wind, among other things. On November 8, 2002, the Minnesota Public Utilities Commission granted the Certificate of Need, which specifically referenced the 825 MW of wind generation from the Buffalo Ridge.

The work we do every day is challenging, sometimes frustrating, and takes a long time, but it’s worth it. When I think about how far we’ve come – growing from 700 megawatts of wind in 2001 to more than 28,000 megawatts today, plus the growth of utility-scale solar – it feels really good to have played an important part of making it all happen.

Twenty years later, and Clean Grid Alliance is still devoted to its mission. “Looking back, it is gratifying to see how closely we have adhered to our original scope of work,” said Beth Soholt. “The work we do every day is challenging, sometimes frustrating, and takes a long time, but it’s worth it. When I think about how far we’ve come – growing from 700 megawatts of wind in 2001 to more than 28,000 megawatts today, plus the growth of utility-scale solar – it feels really good to have played an important part of making it all happen. There’s much work ahead to provide an electric grid that facilitates electrifying our economy, but the Clean Grid Alliance team looks forward to it!” 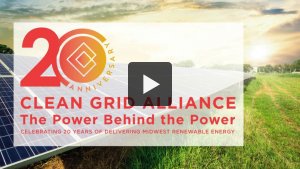